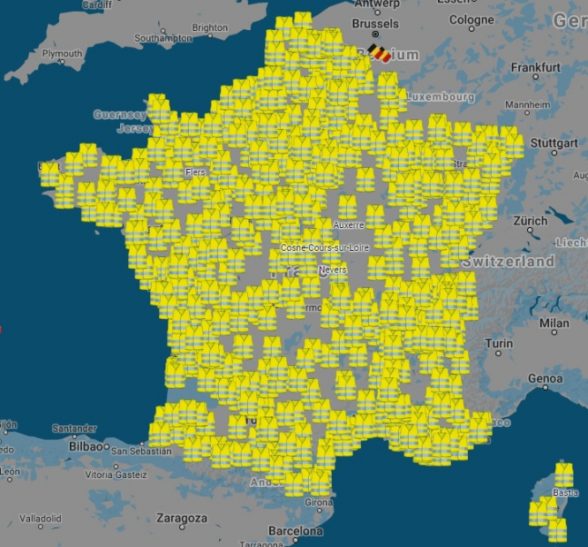 Organized protests in France in November sparked by the Fuel Tax promised by the Macron government – Image source: https://www.connexionfrance.com/French-news/map-shows-locations-of-planned-fuel-price-protests-in-france

Weekends are about demonstrations and protests. That’s a fact of life at the moment, and if we’re “woke”, we are probably interested in the movement to take power away from the corrupt, tyrannical governments and return it to the People—where it belongs. It’s like a contagion now, spreading virally throughout the world; the voices of dissent too raucous to be ignored.

Love him or hate him, trust him or not, President Trump appears to have been a major catalyst in this surge to reverse something that is not in the best interests of Humanity and could well mean it’s utter destruction; the New World Order’s agenda.

The Yellow Vest Movement is a massive, multi-national one—organized but leaderless. It’s a matter of survival. People get that now. If they don’t halt the goosestepping of the New World Order in their streets and make the necessary changes now, the window of opportunity will close and the situation on our planet will progress to the point of no return. This is the end game, and Humanity must act and prove they are worth saving.

As you will see from the following video, it is not only about the fuel tax as the lamestream media would have us believe. The globalists have destroyed all things sacred and the surreptitious creep of their insidous plan to subjugate and destroy us affects every aspect of our lives.

If it sounds overly dramatic, perhaps that is what is needed for the unwitting to grasp the gravity of the situation. It IS a matter of life and death at this point, as anyone familiar with the grand plan can attest.

The Britons are not standing down and promise more widespread protests and a massive revolution if the government continues to ram the EU down their throats. They want none of it, and are determined to take back control of the government and their country. They know they deserve better than what’s been dished out—as do we all.

‘We are NOT Europeans!’ Furious Brexiteer warns of ‘REVOLUTION’ if May fails to deliver

None of this is a surprise to many of us. The writing was on the wall and the New World Order’s agenda was known to us. It seems it had to come to a head before the People en masse could feel the pain enough to react strongly; to know that they had to DO something about it.

Like an alcoholic who has to hit rock bottom before they can seize the reins and realize they are not worthless and find the strength to take control again, The People of Earth are seeing with new eyes amidst the tears of their pain and finding the strength to attack the root of the problem to take down the Beast.

Luke Rudkowski of We Are Change and his source in Paris tell us the true situation in France and Paris with respect to the ongoing revolt since the MSM does not represent it accurately or without spin and filters.

Billy Joyce tells us more about the Nova Scotia rally about the Compact for Global Migration just signed this week by the Canadian government and provides footage of a few people who showed up and held conversations about their grievances. It started small, but like the Christmas morning celebration in Whoville, it will probably swell and grow into quite a din and take on a life of its own. Keep going, Canada.

Billy tells us even a local news crew member knew nothing about the Compact for Global Migration.

The governments of the world want us to believe they’re Santa when they’re really a demonic Grinch, stealing our rights, our choice, our abundance and resources, and even our voices—and until just recently—in full stealth mode. They will do anything to silence us, because they cannot afford for the entire world to wake up to the reality.

Only a handful of yellow vests here, but there was also a demonstration at the US/Mexico border to demand the funding of the wall President Trump promised and featured in his campaign platform to protect the nation and the American people.