Editor’s Note: Thank you Starship Earth for continuing to bring us real news that is happening out there in our world! Aternative Media IS the only way to go these days as the world heats up as Earther’s throw off the extreme control we love under.

Please keep those in the Carolinas in your thoughts as Hurricane Florence begins to hit the US coast. Both my Mother and Brother live in coastal N.C. and the real rain and shifty winds are now happening as of 8PM EDT (5PM PDT). Both have house generators, but expect massive flooding. We will see how things stand Friday AM.

Not surprisingly, we have more pulses from Antarctica showing on the MIMMIC map; these, shooting straight up the Atlantic Ocean where the hurricane activity is. The models’ predictions for the paths of the storms are very interesting. Heads up UK!

Florence is now at a Category 2 status, and may park off the Carolinas and bring massive amounts of rain. Fingers crossed.

Sea-based X-band radar. This is the portable radar platform DAHBOO77 mentions in the video above. They have this geoengineering all down to a science. And who paid for these? Bingo. Taxpayers.

Anything that can be used for positive, they can also use against us, it seems.

We know some odd things have happened with hurricanes in the past. You might recall this evidence of “something” coming out of Hurricane Harvey—the one that devastated the Texas coastal areas and displaced countless people. Thanks for the share, R.

It seems everything that happens that is negative is President Trump’s fault. He is now the culprit in all the hurricanes because of the controllers’ imaginary climate change fairy tale.

Fortunately for Hawai’i, Hurricane Olivia fell apart south of the islands and was downgraded to a tropical storm. They’re getting plenty of rain, though.

Trump hatred began before he was even elected. Go figure.

A newly released video shows a meeting Google had following the 2016 election. In it, they speak of the displeasure with the election results and discuss ways to undermine Trump’s agenda all while bashing Trump supporters.

According to The Daily Wire:

A leaked video from a Google “all hands meeting” following the 2016 presidential election shows the tech giant’s top executives voicing their opposition to Donald Trump and making disparaging remarks about the newly-elected president’s supporters.

In an hour-long video exclusively obtained by Breitbart, Google executives say they are “deeply offended” by Trump’s victory and suggest that his supporters were motivated by “fear,” “xenophobia,” and “hatred.”

In the leaked video, Google co-founder Sergey Brin said “most people here are pretty upset and pretty sad” about Trump’s victory. Brin stressed that he was “deeply offend[ed]” over Trump’s win, saying Trump “conflicts with many of [Google’s] values.”

Brin said that it was upsetting that voters did not share Google’s values when they voted for Trump, compared Trump voters to “extremists,” and suggested many of them voted because of “boredom.”

The executives went on to discuss how Trump’s election was self-destructive but history and progressivism were on their side.

It seems a “big tech company” had undue influence in the 2016 presidential election.

Are folks getting the picture that virtually nothing just “happens” on this planet? Everything and everyone is controlled, manipulated, planned, twisted, covered up, made up, bought, sold and paid for, blackmailed, bribed, lied about, murdered, mind controlled, appointed, tweaked, trashed and scripted—everything involved with an agenda.

We don’t live in the world we thought we did.

They create a false reality, and everything negative is blamed on the El-ites’ enemies. Humans are blamed for “global warming” and “climate change” and too much Co2—anything they can dream up.

If you are not familiar with the term, “Hegelian dialectic”, you might want to look it up. It explains a lot.

Further to that, we have this news from Mike Adams, the Health Ranger at Natural News who says,

Google is a threat to democracy; its executives are dangerous, deranged cultists.

I think these folks are included in the 51K sealed criminal indictments, but yes, they need to be rounded up, too.

Natural News calls for the arrest, prosecution of Google executives for racketeering and fraud

You don’t believe events and processes are contrived? Ben Swann tells us a document created by David Brock, Media Matters over 18 months ago described what we’re now seeing. They want to control EVERYTHING. By controlling Google search algorithms, they control the dissemination of information, and therefore, public opinion and ACTIONS. 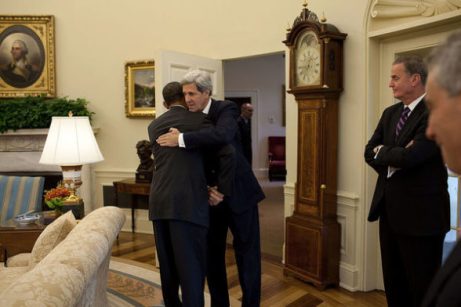 Let’s dish out the blame where it belongs and give John Kerry a dollop.

Were we aware that select government officials can do whatever they like regardless of the platform, promises and strategy of the President? Interesting.

And Kerry’s written a book, too! What a coincidence. Is it about manipulating world affairs and orchestrating the collapse of a legitimate government? We’ll have to ask the actual writer.

Will it include the part about the 2015 assassination attempt in France… or was that just a conspiracy theory? We heard he was shot while negotiating with terrorists… yes, ISIS, I believe it was. Sounds like he’s not the best negotiator. He should read, “The Art of the Deal”.

Former Secretary of State John Kerry has admitted that he met with Iran multiple times in order to salvage the Iran nuclear deal. Effectively admitting to conducting rogue diplomacy in direct contrast to the wishes of the current administration.

According to The Washington Free Beacon:

Former Secretary of State John Kerry disclosed that he has been conducting rogue diplomacy with top Iranian officials to salvage the landmark nuclear deal and push the Islamic Republic to negotiate its contested missile program, according to recent remarks.

Kerry, in an interview with radio host Hugh Hewitt to promote his new book, said that he has met with Iranian Former Minister Javad Zarif—the former secretary’s onetime negotiating partner—three or four times in recent months behind the Trump administration’s back.

Kerry’s comments are in line with previous reporting on his behind-the-scenes attempts to save the nuclear deal and ensure that Iran continues receiving billions in cash windfalls. These payments were brought to a halt by the Trump administration when it abandoned the nuclear agreement and reimposed harsh sanctions on Iran that have nearly toppled its economy and sparked a popular revolution.

The Iranians have refused to negotiate with the Trump administration but apparently, John Kerry is ok. Maybe it is because he folded in regards to the Iran deal.

We’ll see about this. Could be more theatrics.

Judicial Watch never rests and bring us better headlines than the lamestream media.

Thomas Williams will be hosting the THI Show tonight, as usual, and bringing us news analyses, intel and Q&A. He also did a fascinating interview with Randy Maugans recently on OffPlanet Radio you may want to take in. The video/audio is below.