The Current Situation in America and Potential Scenarios ~ December 21, 208 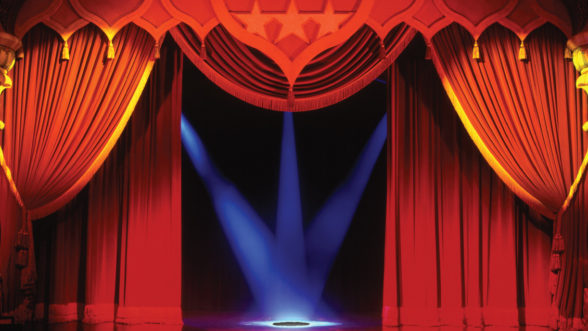 We made it! The shortest day of the year has arrived. From here on we coast to summer. That’s how I look at it. The nights get shorter, the days longer, and we find our way out of the dark… into the Light.

There is a little extra excitement in the air this Christmas as Trump continues to shake up the Washington crowd, key figures retire, the troops come back from Syria, and the possibility of a government shutdown looms large.

Of course it’s all for show and everyone is playing their role to the hilt. It’s not your typical Christmas pageant but I’ll take it.

Many people on our planet are not aware of the situation and don’t want to know. Now would not be a good time to wake them up fully, so it appears the White Hats may be implementing a plan to remove the cabal quietly and under false pretenses. A government shutdown.

These “radical” moves always get volleyed back and forth for a few weeks… or months… so people get used to hearing about them. It gives them a chance to consider, “what if”.

Now it appears we just may be on the verge of a government shutdown—or more—and various sources tell us what they’ve heard about it. We’re hearing about “ten days of darkness”—which doesn’t mean a power outage in this case—it’s a military operation.

The military’s got this. They recruited and installed Trump and protected him, educated the patriots, and many groups are working in concert to eliminate the cabal and bring them to justice.

Many of us may not be aware of anything unfolding at all during this period, depending on where we’re located and the number of cabal members in our area—if any. It will be done as quietly as possible, is my guess. Or maybe it will just be the Washington general area. We don’t know.

Below is a post shared in a couple of places with some details that are floating around. We have no way of vetting it.

However, Thomas Williams told us again last night the wall funding thing is all for show. The Trust funded the wall and pays all government employees because the Fed is flat broke—and they just admitted it. It was a fascinating show. I recommend you take it in. It was another one revealing a startling history you’ve probably never heard.

The drama continues today, as Thomas alluded when he said tomorrow could be bedlam—but a good bedlam, depending on who you are. Trump always keeps us on the edge of our seat, doesn’t he? It’s part of The Plan. Every bit of it, and he’s great at setting the stage.

Enough with government shutdowns – Washington, wake up! When will our leaders learn that we want compromise?

President Trump warned Friday that a partial government shutdown would last “for a very long time” if Congress does not meet his demand Friday for billions in funding for his long-promised border wall in a stopgap spending measure.  Source

According to comments left on blogs, a few are really caught up in the minutiae of who the military pledges their allegiance to: the President or the Constitution. Some believe because they’re “woke” that they know everything.

Most don’t understand that things are different from what we were told. We needed to fix this problem resulting from the cabal changing laws, rewriting documents, and creating Executive Orders on a whim—for the benefit of the crooks—not The People. It’s complicated.

There are actually 4 constitutions according to Thomas Williams, and the People’s military (as opposed to the cabal’s military) have an allegiance to the President, the Commander-In-Chief. I don’t believe they would swear allegiance to a fake constitution, do you? The “official” Constitution references the United States of America, does it not?

It reads… “… do ordain and establish this Constitution for the United States of America.”

Technically, the People of America are part of the Republic, not the United States. That’s Washington; a corporation run by the criminal cabal.

The People officially need (or needed) a new Constitution drafted for America—the Republic, as I understand it.

A lot of details need to get sorted, but that will come. In times of war, where national security is at risk and there is a clear and present danger to The People, there are extenuating circumstances. It’s a state of emergency. Why fight over trivia? That’s creating division and wasting time and energy on things that don’t matter in a crisis such as we have now.

Nothing has been done the way it normally would from the beginning of the “soft coup” as they called it, in 2016. Hillary Clinton was prevented from stealing another election by replacing rigged voting machines, Donald Trump was voted in because he told the truth about the situation in America and those running it and promised to fix it. He has done his best to fight the cabal and fulfill his campaign promises, and continues to do so. And that’s just what we can see. There is so much more that has been done behind the scenes, such as releasing the suppressed technologies, as we recently learned.

The positive military intelligence group (QAnon team) and Trump’s inner circle and other groups who get no fanfare, are draining the swamp. How many other ways do we have to put it for people to understand that unusual things must happen to do this? If you want it done for you, you don’t get to decide how it’s done, when it’s done, or by whom—or how you will be notified.

Q told us yesterday that [D] Day is coming. There’s your direct heads up. Will 2018 be “glorious” as Q said? It sounds like there’s a good possibility it will be.

The Plan is in the process of being executed every day. What must happen will happen, and we will not be told everything for obvious reasons. If people can’t see from the chain of events and intel over the past year and longer, that big stuff has to go down to stop the carnage and prevent genocide, then I don’t know what to tell you.

I can’t speak to all the info in the message below but share it for what it’s worth. You decide.

The meme we shared said martial law would come “after Christmas”. That could mean December 26th or mid-January, for all we know.

I would say don’t sweat the details, just prepare, then relax and enjoy the show—as we’ve been told many times, by multiple sources. You may have heard about the tornado near Seattle. If you don’t want to prepare for martial law then prepare for freak weather because the terrorists do control that to some degree and they’re trying to do as much damage as possible. Prepare for whatever threat you think is likely. We’re just along for the ride—and what a ride it is.  ~ BP

This text is repeated below if you can’t read it. 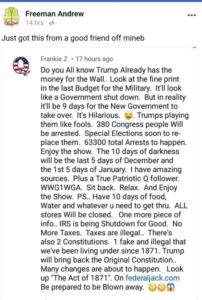 Same info as above from VOAT plus some additional…

DO YOU KNOW THAT TRUMP ALREADY HAS THE MONEY FOR THE WALL? LOOK AT THE FINE PRINT IN THE LAST BUDGET FOR THE MILITARY. IT’LL LOOK LIKE A GOVERNMENT SHUT DOWN. BUT IN REALITY, IT’LL BE 9 DAYS FOR THE NEW GOVERNMENT TO TAKE OVER. IT’S HILARIOUS. TRUMP’S PLAYING THEM LIKE FOOLS.

380 CONGRESS PEOPLE WILL BE ARRESTED. SPECIAL ELECTIONS TO REPLACE THEM. 63,300 TOTAL ARRESTS TO HAPPEN. ENJOY THE SHOW.

THE 10 DAYS OF DARKNESS WILL BE THE LAST 5 DAYS OF DECEMBER AND FIRST 5 DAYS OF JANUARY. I HAVE AMAZING SOURCES. PLUS A TRUE PATRIOT Q FOLLOWER. WWG1WGA.

SIT BACK, RELAX, AND ENJOY THE SHOW.

P.S. HAVE 10 DAYS OF FOOD, WATER, AND WHATEVER YOU NEED TO GET THROUGH. ALL STORES WILL BE CLOSED.

ONE MORE PIECE OF INFORMATION. IRS IS BEING SHUT DOWN FOR GOOD. TAXES ARE ILLEGAL.

THERE ARE ALSO 2 CONSTITUTIONS. ONE FAKE AND ILLEGAL THAT WE HAVE BEEN LIVING UNDER SINCE 1871. TRUMP WILL BRING BACK THE ORIGINAL CONSTITUTION. MANY CHANGES ARE ABOUT TO HAPPEN. LOOK UP “THE ORGANIC ACT OF 1871” ON FEDERALJACK.COM

BE PREPARED TO BE BLOWN AWAY.

My comment: after re-reading the March 1, 2018 Military Tribunal/Court Martial EXEC ORDER, no one can be arrested before Jan 1, 2019 and have this EX Order apply.

2018 Amendments to the Manual for Courts-Martial, United States

https://www.whitehouse.gov/presidential-actions/2018-amendments-manual-courts-martial-united-states/ (If I am reading it correctly.) If so, then there would be no point in declaring Martial Law right after Christmas, if no one is going to be rounded up until Jan 1 or some time there after. That’s just my opinion. I do believe Martial Law will be declared at some point, probably when the round up takes place, as this is what Q has hinted at in 2 posts now. This guy seems to be quoting insider sources, but remember we are in the middle of a major war here, and disinformation is necessary to deceive our enemies. So just get your households prepared mentally and physically for this eventually, so there is no panic, and everyone knows what to do, or not to do. Know that possible interruption of services, if they happen, will be restored as soon as possible, but we need to be prepared to take care of ourselves during these service disruptions.

Other than that, I sure hope this guy is right about shutting down the IRS and arresting 380 Congressmen/women.

There you have it; some additional feedback. Most of the reception of the news of a potential martial law scenario has been very positive. Patriots understand, are ready, and welcome it.

Some folks are already traveling to be with family for Christmas so we thank you all for flying with us this year, for your support, viewpoints, contributions to information and news we share, and the generous donations. Merry Christmas from me, and Number One.

Be safe, and full of joy and positive anticipation for the days ahead. I’m not going anywhere, have no guests, and will be carrying on as usual. Let the round-up begin!  ~ BP

Cynthia is the typical Pisces! Her left brain activities include scientific activities in the hospital laboratory as a director. Her right-brain activites show as a painter, photographer and musician. She is known as the scientist who sings!
View all posts by cindyloucbp →
This entry was posted in Uncategorized and tagged border wall. President Trump, constitution, courts martial, Executive Order, funding, Government shutdown, love, martial law, military, prepare, prepping, QAnon, Starship Earth, tribunals, war. Bookmark the permalink.