Editor’s Note: Humanity is joining together globally to change the way we all live our lives. Economic slavery is no fun and it’s time to change the rules! Many thanks to Starship Earth for fair and honest reporting, so…please read, be prepared for whatever (weather, earthquake, fire) in your neighborhood as the cabal gets even more desperate for control, and…

The above, and the following are what happen when people are roused from slumber long enough to open one eye, put aside the distractions, and realize the world demands their attention. Actually, Humanity is realizing they got screwed over.

THE WORLD IS WATCHING 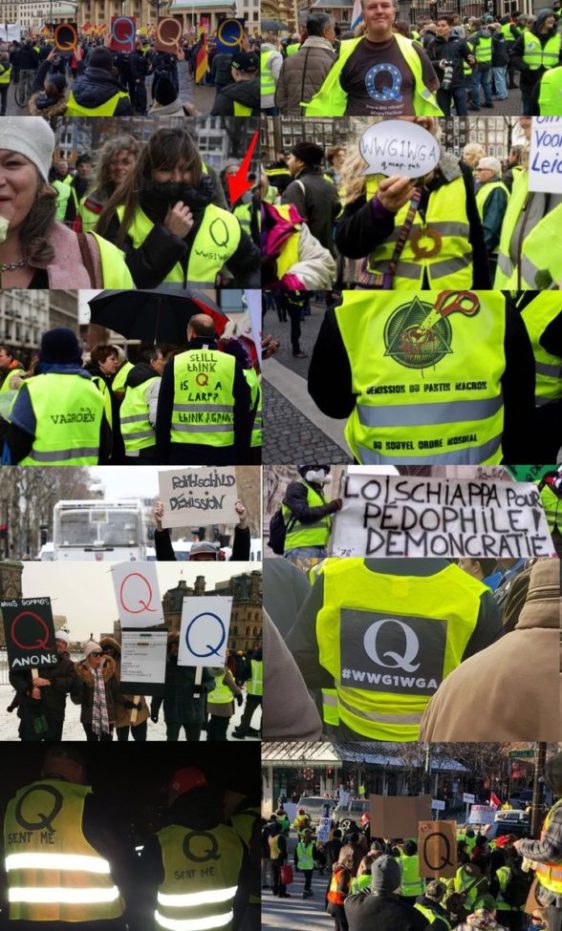 “THE WORLD IS WATCHING.”
UNITED NOT DIVIDED.
TOGETHER WE WIN.
WWG1WGA!!!
Q

Is that cool or what? (no pun intended)

I just have one question for all the recently revived patriots: What took you so long?  ;0)

I wonder how far we are from critical mass…

Here in the old US of A we don’t get much in the way of “real global news” except from our friends in other countries, so we really appreciate the shares of photos and videos and accounts of what is actually happening around the globe. It’s exciting, and through the Internet we are informed.

Not only are the People protesting horrific living conditions and tyranny, they know about the pedophilia, too. That is a major victory we have managed by sharing our knowledge. Kudos to the many brave victims who have come forward to confirm the reality of this inhuman, predatory activity, and the insiders who are making the facts available that are shaking the disbelievers awake.

The video I shared yesterday showing how the French gilets jaunes PEACEFULLY shut down the country went viral and the channel owner at “7” is over the moon and left the most beautiful, heartfelt thank you to all his new subscribers and those who shared, so I’m passing it on. Way to go!

Thanks for the low-down on the situation in France. Take care, everyone.

Fortunately, we have real investigative journalists like Luke Rudkowski who is on site in Paris and informs us that Europe is WIDE awake and letting the tyrants know they’re sick of the manipulation and will not stay in the EU or lap up any of their “leadership’s” drivel any longer and there is talk of “FREXIT”.

We see the evidence not only France, as the yellow vests have spread to Sweden, the Netherlands and Germany. We mentioned how they also showed up in Ottawa, Canada, the nation’s capital to protest the Compact for Migration Trudeau is trying to sign on to but many, many countries have refused, so stay on that, Canada!

Spain and Germany may soon be striking against Amazon and holding walk-outs. Humanity is very unhappy.

The situation is complex in Paris because the violence isn’t only about the will of the People to reject the NWO agenda. As I said yesterday, we don’t know who actually comprises all those police forces. Some could be paid mercenaries. Many could be. There are reports of brutality and we don’t know how much is perpetrated by agents provocateurs. The control freaks introduce some sort of violent faction to nearly every protest and demonstration, it seems, no matter where it is.

We DO know the globalists want chaos and they won’t miss an opportunity to escalate violence, and cause fear and confusion. Luke brings us the real updates from what he experienced in Paris and tells us the powers-that-were are concerned about the information shared on Facebook—so be prepared for major censoring and perhaps even a blackout.

Luke mentions heavy propaganda in France, and if you can believe it, the El-ites are now suggesting they should investigate Russian collusion involvement in the unrest in France. They’re unimaginative morons out to get at Putin, an arch-enemy.

We now know that the situation in Paris itself is different from other areas of France where the protests involving the gilets jaunes are more pacific with police donning or displaying yellow vests and supporting the People. In the video below from RT we hear Macron saying “we all want to get back to our normal lives”, or something to that effect. Yes, that’s what the globalists want because when you shut down the country, you shut down the commerce and their ability to steal more funds to line their own pockets, pay their thugs and globalist partners, and furnish their yachts, swanky hotels and castles.

The following video is a great update from We Are Change, with Luke and Jason Bermas. Stay safe, Luke.

It’s Spreading Throughout Europe And Now The World!

Dan Dicks at Press for Truth is another reliable (Canadian) journalist who brings us the real situations in video. Here he discusses the possibility of growing Gilets Jaunes protests in Canada. It’s short and well worth your time as Mr. Griffin refers to the propaganda around climate change, taxes, and the theatre of the globalist agenda to deceive the People and increase government power, and discusses what must be done to correct the problem.

Are The YELLOW VEST Protests Coming To CANADA? (With G. Edward Griffin)

This wide, wide awake guy, Billy Joyce in Nova Scotia, Canada, is bilingual and has been doing French translations for us from the footage in France and in Ottawa this past weekend so we get the truth from the horse’s mouth—not lamestream spin and twisted interpretations. He’s a valuable resource.

Check out the Rothschild bankster’s lame response to the gilets jaunes protests. He’s in deep doo-doo and he knows it. He didn’t “decide to run for President”—he was installed by the globalist psychopaths to deliver more lip service. No one believes them any longer, however. If they don’t walk the talk—they’re toast. Sniff-sniff! Do you smell that? Something’s burning.

Our friends in the UK are not to be outdone. They clearly demanded an exit from the European Union and the corrupticats have done everything possible to stall it and delay it indefinitely. Yes, they have obstructionists, too, who will be urged to consider expediency by the awakened masses—or else. Another proposed referendum??? What?! Tommy Robinson’s back and fueling protests over the “betrayal”—which is exactly what it was—if you’re being nice.