Schuman resonances are named after professor Schumann who was involved in early German secret space program and was later paperclipped into the United States. The frequencies of Schumann resonances are fairly stable and are mainly defined by the physical size of the ionospheric cavity.

The amplitude of Schumann resonances does change and is bigger when ionospheric plasma gets excited. Ionospheric plasma excitation happens because of solar activity, thunderstorms, use of scalar plasma weapons and HAARP and lately also when the Light forces are clearing the plasma anomaly. 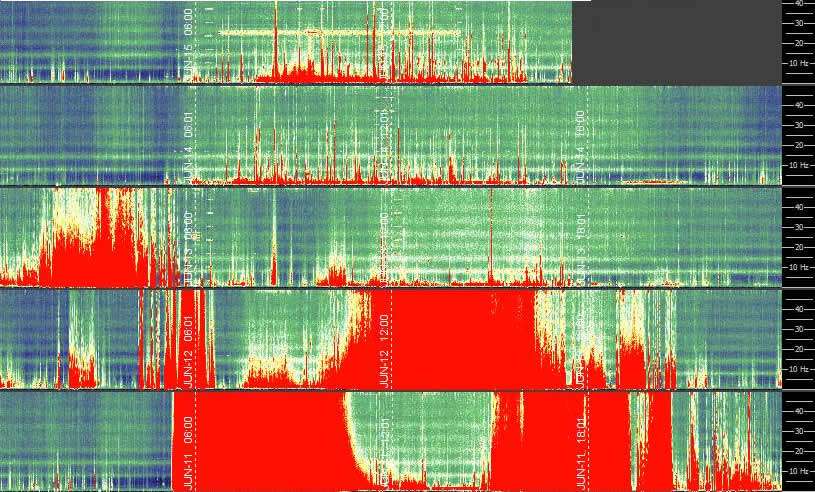 The Heartbeat of Planet Earth

The below real-time trace is updated every 60 seconds and shows meteors detected over the preceding two minute period.

Time is shown as Universal Coordinated Time (UTC) which is an intentional time standard equivalent to GMT. This avoids regional confusion with local time zones.

When a meteor strikes Earth’s atmosphere it decelerates rapidly. The friction created by the air causes the meteor to burn up at extremely high temperatures creating the white “shooting star” that we are all familiar with. This process also ionises the atmosphere along the trail making it possible to reflect radio waves.

Utilising a high powered VHF radar signal sent into the sky, we are able to detect reflected waves from these ionisation trails. Because the meteor is moving very fast, the reflected signal is shifted in frequency, by an amount according to it’s speed. This Doppler shift is also heard as an audible ping by the station operator.

Our system translates the reflected wave into three main parameters – Amplitude (strength), Frequency shift (Doppler shift) and decay time. This allows us to determine the relative size of the meteor strike (vertical scale) and the relative approximate speed and deceleration (width of the trace).

You can see the output from our system above in real time. the graph shows the presceding one minute period. During a meteor shower this trace will be full of meteor strike traces, but it is also surprising how many meteors are striking Earth’s atmosphere all of the time.

Freedom is the right to tell people what they do not want to hear.