This girl has got guts…lot’s of ’em! Molly, the author of Starship Earth: The Big Picture is in overdrive wanting answers to the many, many questions surrounding our reality. Who has if right? Who has this life figured out? Who knows  what our future holds?

I AM posting her article here and asking you to read this and think, consider, and then think a bit more, and…

If you can wrap your head around what’s coming, kudos, because I still can’t, but I’m going there anyway. It’s what I do.

I’ve thrown this together and will be rambling, but I’m out of time.

Thanks to Comments, this is an interactive blog and I know many of you will have plenty to say about this and offer your thoughts and pieces of the puzzle.

While viewing some of Dante Santori’s videos I had the urge to revisit a couple of the Yellow Rose for Texas videos because some of the information overlapped and the, “You have no idea what’s going on.” clip from Dante haunts me.

I started posing a string of “What if…” questions to ponder, and ponder I did.

I didn’t get around to watching the YRFT videos, but last night I checked in to see what Dani McKenny and Lisa Harrison are up to and ironically THEY were looking at Rose’s information last week… and down the rabbit hole we go.

I haven’t yet listened to their entire discussion, but here is their video:

For some of you, part of this below is a brief review.

If you didn’t see YouTuber ‘Yellow Rose for Texas’ videos like The Lie NASA Told, then you may want to do that because it was ground-breaking stuff. Waaaaaaaay out there, but a lot of it made sense. I’ve included it below.

Here’s a short clip from the One People site where Dani and Lisa have their post and their discussion about this.

Rose said we are captive in “Server D”, a virtual reality. Like a holodeck, for you Star Trek fans.

They tell us we have been separated from Source. Well, that would do it!

She showed us images that supposedly show satellite footage from NASA’s Corr2, Secchi, LASCO, etc. and one was a real show-stopper.

It was a thumb. It seemed to suggest that we live in a micro-virtual reality world. Now Dani and Lisa have posted a photo of an entire arm and hand that appear to be making adjustments to the sun disc. 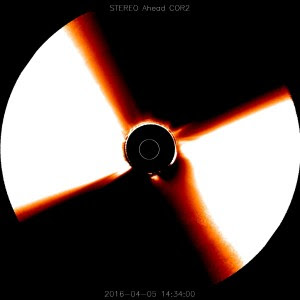 The equipment, which Dani and Lisa show a similar image of in their video, consists of a mechanical arrangement of the planets, sun, moons, etc. on poles, and the planets aren’t real celestial bodies they’re ships disguised as planets.

Rose also told us that “they”, the Enemy Forces or EF, refer to the sun as Ed, and that it is a mechanical time piece and has been destroyed by “the mob” (the Allies). She showed us gears popping out and it was burning up after the mob’s attack.

For those who wish to see The Lie NASA Told, here it is. I had to watch it several times and was still not sure what to make of it. It’s beginning to make more sense now, two years later.

It’s freaky stuff, I know, but consider this:

There is nothing rational that can explain what is happening—or not happening—on this “planet”.

Why are we continually told “it’s going to happen soon” but nothing happens? Year after year.

There are plenty of excuses, like they’re going to hurt too many people if we revolt and get violent… they’ll chip us, round us up and throw us in rail cars in shackles and send us to FEMA camps with guillotines… blah, blah, blah.

As for the “mass arrests”, we’re told…

…there are star wars going on to free us and SOON we will be free and get our memories back and have our ascension.

But we’re not free, are we. We’re always waiting. For what? Green Light.

The good guys have been reduced to telling us stories to hide what THEY are doing to hide what’s going on.

And NOW our reality, if you can call it that, is faltering. The sun is not where it’s supposed to be—including in my yard—not even close—and many people have photos/video of it “flickering” wildly recently and sunspots out of place.

Massive celestial bodies are drifting over head and no one will say boo about it. If we are in a micro-virtual reality, sailing through space, a lot of things would look massive to us, wouldn’t they?

We’re told “they” can’t tell us what’s going on because it would cause panic. I don’t think it’s about the ETs or disclosure. So there are extraterrestrials. Whoopee-do. Those are distractions. It has to be much more.

People are also talking about the ‘Mandela Effect’, and have evidence that what was, has changed, even as far as the earth and the oceans.

Bill at American Kabuki reported the other day that patches of his hair are going dark again.

Hours of time are going missing. (Remember “Ed” was destroyed?)

Power grids have gone down. Cellular systems have been failing; electronics malfunctioning.

It certainly sounds like we live in a construct that is in flux; even disintegrating. Earlier we heard we might have to be “evacuated”. If the old girl can’t hold it together in these increasing frequencies, then yes, that may have been necessary, but I think we’ve left our moorings for long enough that they can tell we’re going to make it alright. Barely.

And might our “new Earth” actually be the “old one”, that we left when we were kidnapped?

At what point in history (which is probably much shorter than they let on) have we lived in this server? I don’t know! Everyone leaves that part out, don’t they? lol

Some have likened our reality to The Truman Show, suggesting we live in a fish bowl, constantly under observation, control and manipulation. A Petri dish, if you will. Don’t we keep hearing about “the experiment”?

Why do the White Hats even negotiate with psychopaths? Why don’t they just eliminate them? They know where they are. What—they don’t have enough soldiers and guns to take out some old men and a few hybrids?

What if to do so would put us all in grave danger? What if we really pissed them off and they pulled the plug on us; just shut down the server? What then? Would avoiding that be worth the effort to negotiate with our gatekeepers and worth the indefinite wait? Someone seems to think so. We are cherished souls.

Something is brewing; coming to a head. The Galactics are quiet, seem smug and act like they have an ace or two up their collective sleeve.

Some of our messengers like to go on about how we can’t just expect to be rescued, that we have to fight back, take responsibility and fight our own battles; that we have to EARN our freedom. And that’s what many of us ARE doing and HAVE been doing.

Monsanto has had the crap kicked out of them. People are engaging in all sorts of civil disobedience. Some have dedicated their time to educating sheriffs as to their local power. We are sharing shocking information about the murders of doctors, the causes of disease and the cures, fake wars and aggression, pedophilia, Satanism, torture, bribery and blackmail in Congress, vote-rigging, GMOs, chemtrails, vaccines, mass surveillance, bankster fraud, pyramids all over the planet and UFOs… and we’ve woken up a lot of people over the years. I don’t think there is any more we can do or that we should be expected to do. We’ve all but woken the dead. We’ve earned our wings and it will look great on our cosmic résumé.

What’s left is up to those who REALLY know what’s going on. The space wars are long over. The mob took care of that. Something is up, and no one is going to tell us what until after the fact so I am going to take the Pleiadians’ advice… and just relax and enjoy the “ride”.

At the moment, life is getting more amusing and ridiculous by the day. This reality show is heavily scripted and we’re just playing roles. I can’t take it seriously any more. I DID rename the blog, “Starship Earth”.

Cobra told us that many humans were taken hostage by the dark. What if WE are some of those souls? What if what is happening now are negotiations with our jailors? Someone suggested recently… somewhere… I can’t recall where… that much of Humanity is suffering from the Stockholm Syndrome. Not me!

We won’t know who we really are until we are freed from this “matrix”. We’re the men and women on the stage that Shakespeare wrote about. We have been brainwashed to believe this is real. We’ve been trapped for so long we don’t know what free is or who we are. At the moment we do, there will be one helluva party.

Our liberation is ASSURED, and that’s why the Galactics are already celebrating. Whether they are towing us through dimensions, showering us with high frequencies, or using magic, I don’t care. Just get us the hell out of here. We’re breaking up. Ahead, warp factor 10. Make it so, Number One. Put the champagne on ice—Starship Earth is limping home.  ~ BP

Cynthia is the typical Pisces! Her left brain activities include scientific activities in the hospital laboratory as a director. Her right-brain activites show as a painter, photographer and musician. She is known as the scientist who sings!
View all posts by cindyloucbp →
This entry was posted in Uncategorized and tagged Construct, Dani Arnold-McKenny, et's, fake reality, freedom, galactics, holodeck, liberation, Lisa Harrison, love, New Earth, planet earth, Server D, slaves, Virtual Reality, Yellow Rose for Texas. Bookmark the permalink.