We are at war and in times of war, politically correct language is not required or appreciated. TRUTH, however, is mandatory and it’s not being told by what is supposed to be the People’s media; by journalists or public broadcast—so it is up to us—as citizen journalists.

Those who seek to control the narrative around the border crisis in America are, as usual, lying hypocrites. We have statistics and proof from boots on the ground; the consummate authority: border patrol agents. See the interview below.

To even suggest that ALL these violent marauders are “victims” is obviously agenda-driven drivel. As some have said, they’re lucky it was only tear gas when illegal aliens have already killed one border patrol agent with rocks. Killed him, and put his partner in hospital.

Pepper spray and tear gas never killed anyone, but hopefully it taught these invaders a lesson.

If they would storm two borders, attack officials and kill those who attempted to stop them, what do you suppose they might do to YOU if they happened to want your car, your boat, your quad, jet ski, your big screen TV… or your wife or daughter? Get the picture?

Are you aware that those who stormed the border and were turned away soon broke into the homes of Tijuana residents?

We already know what the hordes of “immigrants” the globalists imported into Sweden, Germany, and other countries have done to those countries and their people. It’s living hell and the globalist governments do nothing to prosecute the rapists and murderers. They embrace the “catch and release” protocol which Trump has now banned. That’s why people in Europe are repeatedly protesting and demonstrating against their governments. They’ve had enough of that kind of a regime that does not work in favour of the People.

America is under no obligation to provide any kind of “sanctuary” to foreigners without the legal system established by the People’s government.

Worse, the treasonous media has established a lexicon of brainwashing marketing language to minimize the concept of threat and increase the concept of victimhood for these paid thugs. We have “sanctuary cities”. How pastoral. 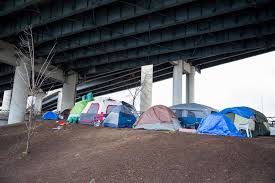 This guy lives in the desert, apparently, in his truck with his dog if the stainless steel dish outside is any indication. He’s been parked here for almost two months. I see him every day, two blocks from my home. I assume he is unemployed but he is often talking on the phone when we go by on the trail.

According to the talking heads and Washington bureaucrats we also have innocent women and children seeking “asylum”; “refugees”. How desperate and needy. How do you know some of them aren’t the notorious child traffickers the world is trying to eliminate? Intelligence reports tell us many of them are—but the media doesn’t discuss that, do they?

And lets not forget the DREAMERS. Dreamers! Who writes this stuff? The mockingbird media is leading dim-witted sheep down the garden path with their hypnotic, linguistic rhetoric.

America is fast becoming a ghetto with hordes of its own citizens living in tent cities and cars—all by design. Families are existing hand to mouth, paycheque to paycheque. People can’t afford Obama’s “affordable” health care so they’re penalized and forced to pay for it anyway and get nothing at all. How did Obama last for 8 years? Election fraud—but that’s another horror story, isn’t it? It’s easy to program voting machines and pay immigrants to vote your way.

How the hell are you going to look after hundreds of thousands of poor, uneducated immigrants, America? Would you sooner allot your tax dollars to raising immigrants than looking after your own natural-born citizens and infrastructure? Your country is crumbling right out from under you and you just don’t get it.

America is a shithole thanks to previous administrations and the globalists who schemed to destroy it, and anyone who says the People owe it to these would-be “refugees” to invite them in, feed them, clothe them, care for them and educate them is a gullible idiot and it’s infuriating to watch the treasonous media in action pushing these concepts to people who watch television and believe everything they hear.

Donald Trump believes he can “make America great again.” The deep state plot to allow hundreds of thousands of unvetted immigrants into the country would prevent that and must be stopped in its tracks—by any means necessary or America may as well be Africa because that will be your new standard of living. Even now not everyone in America can say they have clean water to drink. It’s outrageous.

Americans need to be nationalists—like President Trump—not bleeding heart liberals who are tricked into giving away the farm to care for those they can ill afford to. Care for your own homeless; your hungry; your sick; your Veterans; your land and water first.

Immigration laws exist for a reason; to protect Americans. It’s not “racist” to cull the herd, to be choosy about who you embrace and to keep out known criminals, child abusers, rapists, gun runners, drug smugglers and violent offenders.

Over the years thousands of immigrants have already sneaked into the country, and it shows. I see it every day here in Arizona and it’s disgusting. Too many immigrants do not care about your country, the land or the people. They steal. They leave garbage everywhere; dirty diapers in mall parking lots, old furniture dumped at the side of a road—and they believe they are entitled.

How do all these people get in? The lack of a wall, for one thing. Literally a lack of a wall of any kind. Take a look at this short video below from Texas. There’s a steel wall—and then there isn’t. Nothing. It just ends. The people who live there and law enforcement deal with illegal aliens all the time and this ABC documentary from Fort Hancock, Texas is the proof—made in 2013. It’s a long-standing problem exacerbated by a shadow government that wanted to destroy a strong, rich country.

UNDER SIEGE: Fear on the Border in Fort Hancock, TX

No, this is not a new problem along the border—they have just jacked it up on steroids because the deep state traitors are desperate to execute the New World Order’s agenda and retain their tyrannical rule of the planet.

What we see today at the US/Mexican border is an outright invasion by paid thugs; planned years ago by psychopathic tyrants.

Wake up and smell the coffee, America—or kiss your country and your future goodbye. You’re damn lucky Donald Trump was elected President because if it had gone the other way, you might be seeking refuge in another country because you can’t stand living in your own any longer. The globalist plan was to trash the planet and there are few standing up to them and putting a stop to their agenda.

In this next video below we see hundreds of our friends in Britain demonstrating and if you listen, you will hear them chanting, “WE LOVE TRUMP!” Do they know something America doesn’t? The whole world knows what’s unfolding in America right now and they are rooting for us and the President to drain this swamp, because they know that once America is secured, other countries are next. For some reason Americans are living in a different reality.

I’m a tax payer in America and I say BUILD THE DAMN WALL—and FAST.  ~ BP

[D5] Nothing Can Stop What is Coming

Caravan ‘Refugees’ are LUCKY it was Only Tear Gas

According to numbers provided to the Daily Caller by the Department of Homeland Security, CS gas, commonly known as tear gas, was used by U.S. Border Patrol agents 79 times from 2012 to 2016.

Tear Gas Usage At The Border:

In addition to CS gas, Border Patrol regularly used Pava Capsaicin, which is commonly known as pepper spray, for performing area saturation associated with law enforcement operations. The numbers below describe the uses of Pava Capsaicin between 2012 to 2018. Pepper spray was used 434 times while Obama was president.

The agents used pepper spray or tear gas a total of 513 times between 2012 and 2016. A DHS spokesperson told The Daily Caller that no records before 2012 were available. (RELATED: I WAS TEAR-GASSED, ALONG WITH 60 OF MY CLOSEST FRIENDS, IN AN ENCLOSED SPACE)

Even RT featured a segment about the border loaded with disinformation and absurd commentary.

Look at all the thumbs down for this video at YouTube—twice as many as the thumbs up. At least there are a few critical thinkers among a nation of brainwashed people who allow the media to tell them what to think.