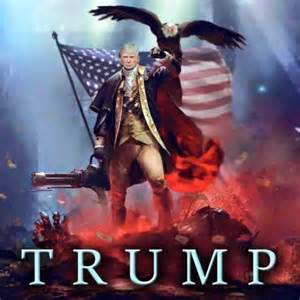 Some have a dismal view of the developing situation at the US/Mexican border and what it may ultimately entail.

As a resident of Southern Arizona, one of the four border States, I must confess I’m watching with a little trepidation and yet a glass-half-full positive attitude because Trump has earned the title “maestro” in my book. I am confident he and his inner circles of military intelligence and interdimensional assistants can assure us, “we’ve got this”.

While the President and his men have told us they will have the boots on the ground to humanely and lawfully deal with the would-be immigrants, there are those who don’t see a completely peaceful end to this chapter of the Revolution.

I thought the “tent city” approach sheer genius. It worked for Sheriff Joe Arpaio and his Arizona inmates and it ticks all the boxes for me.

What I don’t trust is the intent of the marauders who defiantly chant, “We’re coming, Trump!”. We know from current experience it has been all too easy for lawless southerners to thread their way into America through a pathetic hoax of a border—in name only. It’s basically a fence in some places and a royal joke.

Those who have been patrolling the Arizona desert for months like the “Veterans On Patrol” (VOP) and working alongside Border Patrol have told us numerous times how easy it is to breach the border, and how violent gun and drug runners and Human traffickers use the same routes and the same camps again and again out in the desert where residents are few and far between and cattle are more prevalent than people.

DarkSkyWatcher (Paul Flores) has been combing the desert with the VOP this year, professionally documenting the searches and uploading them to YouTube. They will open your eyes.

I can’t share the video without his permission, but you can visit his YouTube channel and choose the video title below to see the October 24 upload from the border where they found plenty of women’s and children’s clothing, among other things. With his video camera capturing every move from over his shoulder, it’s like being there.

The White House decked out for Red October.

One thing should be clear to all in this developing scenario: what happens now sets a precedent. Obama may have opened the border and encouraged all manner of “dreamer” or gun runner or Human trafficker to enter America unrestricted, but there’s a new sheriff in town, and how the President handles immigration from here on sets the tone for future decades and establishes the expectation for all would-be immigrants. We don’t even know how many of those poor misguided folks will make it back home safely. I doubt if they’re going to get buses, trains, or trucks to assist them in what the deep state no doubt considers another “failed mission”.

America cannot house and care for thousands of immigrants any better than any other country, and Americans do not want unvetted people living amongst them that may be a threat to them or their families. We are already hearing that some of the migrants have been shooting at Mexican law enforcement.

We have to protect the citizenry of America and I am satisfied that is being done to the very best of the President’s ability. We don’t need to make it about politics when it’s really about the Constitutional Republic we reside within.

If these aggressive, self-centered migrants think they are going to trample the fence into America the way they did to enter Mexico—they have another think coming. Hopefully they will see reason when they arrive—or before. I hadn’t anticipated that “Red October” would involve patriot blood.  ~ BP 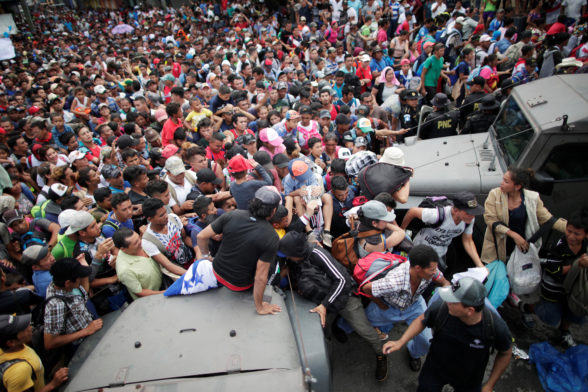 Honduran migrants, part of a caravan trying to reach the U.S., storm a border checkpoint to cross into Mexico, in Tecun Uman, Guatemala October 19, 2018. REUTERS/Ueslei Marcelino

Honduran migrants, part of a caravan trying to reach the U.S., storm a border checkpoint to cross into Mexico, in Tecun Uman, Guatemala October 19, 2018. REUTERS/Ueslei Marcelino

As the Caravan Approaches: There Probably Will Be Blood…

… and the Dam Wall Finally Must Be Built

There seems no way that the caravan of 4,000–14,000 migrants approaching our southern border is going to end without blood being shed. There probably will be blood. And, while the debate over “man-made climate change” is far from over, the debate over The Wall is finally over:

This past year, Israel has had to deal with a variation on this same human conundrum. Incited by Hamas murderers at the helm of the Gazan terrorist government, and led by experienced bloodlusting murderers, thousands of Gazans have marched repeatedly on Israel’s southern border these past six months, trying to force themselves into the country. Their goal has not been to learn Hebrew nor to get recipes for gefilte fish. Rather, they have tried overrunning Israel’s border for the purpose of bursting through, massacring anyone they can reach, and eventually seizing the country.

Israel has done everything humanly possible to thwart the evil, protect her border from massive incursion, and to drive back the thronging mobs. Remarkably, Israel has succeeded in protecting her Gaza border with relatively few casualties, but some among the hordes indeed have been killed. Almost all the deceased have been documented to be experienced terrorists affiliated with such murderous death gangs as Hamas and Islamic Jihad. Sooner or later, when the mobs would not withdraw, Israel has had to shoot. They have had to.

Predictably, the United Nations condemns Israel each time, and the fickle perfidious European Union, now overwhelmed by Muslim Arab voters whose numbers now swing local and national elections from Germany to France to England, join the chorus of condemnation. But, as President Trump has demonstrated in dealing with tightwad-cheap penny-pinching European prigs refusing to pay their fair share of their own NATO defense while continuing to cheat America for decades in trade, there comes a point when a self-respecting person just says: “To Purgatory and to Gehenna with Europe.” First, it just feels so good — as an American people who sacrificed 116,456 boys to save their rears in WWI and another 405,399 to bail them out of WWII — just to say it. The past century has shown that the gutless West Europeans lack courage and internal fortitude anyway (which is why they steadily are losing their continent) — except when a rare Churchill emerges to save them from their own cowardice, only to get voted out of office the moment the scare has passed. And, besides, wait and watch what happens when foreign hordes try overrunning their borders. (They usually come crying to us to save them.) So they condemn Israel for doing one-thousandth of what they do when their borders are infringed.

The past year’s Israel experience in the face of Hamas hordes informs what we Americans may expect soon at our own southern border. Thousands — perhaps as many as 14,000 — are marching brazenly on our country. They really believe that an Obama-weakened-and-castrated America has lost its backbone completely, and feebly will bow to their onslaught. They have seen that the Mexican armed forces could not stop them, buckling under the press of the mob. And now the mob surges towards us — with slow-moving approaching images reminiscent of European Zombie Walks timed perfectly for Halloween season.

Let it be clear: If we let them in — and, yes, they are people with feelings and sensitivities and loves and hopes and dreams — then there will be another Caravan after it, and next time it will be a Caravan of 10-15,000 sensitive lovers and hopers and dreamers. And three months later it will be another Caravan. And then another. What $38 million cash raised and wasted in one calendar quarter could not buy for Beto O’Rourke and his Kennedyesque DUI driving record and his Kennedyesque attempt to flee from the scene, the hordes will solve: Texas really will turn bold shades of “overnight blue.” Arizona will turn blue. Alabama and Mississippi will turn blue. North Dakota and Montana and Idaho will turn blue. We will lose this country — exactly as the Democrat playbook seeks. Despite their losing the male vote, the Caucasian female vote, the married woman vote, the blue-collar union worker vote, the Democrats simply will import hordes of new voters to seize power.

James Munder brought us the following update a couple of hours ago.

We have experienced similar confrontational events in patriot standoffs against the feds, such as the Bureau of Land Management on the Bundy Ranch in Nevada. There were snipers and itchy trigger fingers and it seemed bloodshed was imminent but miraculously, it was resolved peacefully.

We heard the snipers were surreptitiously “removed” prior to the confrontation, and we thank our guardians for the “divine intervention”. I hope we can expect a calming, disarming mood to descend on the caravan members so they do not injure American military, civilians, or provoke nasty outcomes.

Obviously the New World Order wants chaos, bloodshed and suffering. They have selfishly used thousands of people to pull off this assault on America and the patriots who strive for peace and honour. Let’s hope the ‘Trump Effect’ is still as effective as ever.

An old song, “On the Border” suddenly came to mind with strains of “smuggling guns and arms across the Spanish border” accompanied by a Spanish guitar and I thought what a remarkable coincidence. When I looked for a video, I found a ‘Tuber had uploaded a version with wonderful images of Mexico—which is perfect. I never thought, all those years ago when this tune was a favourite, that it would resurface in such a context for me, but we’ll go with it. For those who have never been to Mexico and wonder what it’s like, you now have some great visuals.

Pray for a peaceful resolution. One misstep and this could go horribly wrong and ignite a civil war and/or martial law.  ~ BP