First of all, I have to say I (and others I know) don’t have a lot of confidence in the ITCCS arrest attempt of the Poop this week in Geneva. Something’s not right. It makes no sense for Kevin Annett to advertise with David Zublick that the warrant will be served and the Poop arrested on a specific day. Who broadcasts to the enemy their battle strategy? That’s a major tactical error and suggests a psyop. I have always believed in Kevin and the ITCCS but I can’t in light of this latest news.

Speaking of psyops, this might be another one. Rebel Media is now advising there is a fund raising campaign for Tommy Robinson (Stephen Lennon) because lawyers are filing an appeal and posting bail and the family needs money. I wonder where that money will really go.

It’s not that we enjoy being suspicious, but even ‘professional’ news like this is suspect any more. We’re forced to take other people’s word for things and we prefer to err on the side of caution, if necessary.

The cabal is beyond broke, no longer controls the financial system, and are being shut down all over the world. I wouldn’t put anything past them.

With regard to the VOP Tucson human trafficking story, DarkSkyWatcher74 is back down in Tucson for a second time. The psychopaths are still attacking the group online which is par for the course. The sheer volume of new channels popping up on ThemTube to discredit Lewis and the VOP is proof they don’t want anyone taking Operation: Backyard Brawl seriously.

DSW is a seasoned journalist/vlogger and shared the video below that will update anyone interested on the current search efforts.

Recording and broadcasting has been severely hampered this week as it’s been too hot to keep the tech charged. The ranchers and Border Patrol have been sharing information with the teams and they are finding and documenting the proof that they are right in the middle of the trafficking corridor and forcing the coyotes to change their routes.

It’s a really informative video as far as the drama around Operation: Backyard Brawl, the challenges and progress. The evil people are putting out endless hurtful propaganda; the “haters” as they call them. This is war, and the dark will do whatever they can to discredit or stop the efforts to expose human trafficking and make the world a better place.

DSW got dehydrated and subsequently sick from the heat this week so he knows exactly what it’s like there. He went back to Tucson for round two because he’s documenting history, taking part, and making a difference. Kudos to everyone involved in OBB. You’re a rare breed.

He also talks about some of the supplies donated, like k-rations, FrogTog type cooling towels, shovels, backpacks, tents, plate holders to protect them in case they’re shot at, boots, electrolyte powders, glow sticks, etc. The haters tried to tell their “followers” the VOP was getting all kinds of donations and were going to make off like bandits with money, gas cards, etc. Small minds. But they have no problem asking patriots to support them in their disinformation channels.

A couple of times I’ve heard the VOP folks say “Q” is there. It sounds like they mean “QAnon”, so that’s interesting. DSW says in this video that they’re elusive and he hasn’t talked to them but knows they were there.

This video may not always stream so if it’s not working, you may have to try again later. DSW says when he gets home on Monday he will put another video together to share. He has recorded a conversation with a Border Patrol officer in uniform, with his patrol vehicle so we will see that what is going on with OBB is legitimate and legal, and making a difference.

Lewis got his Facebook page back, so he is no longer uploading to ThemTube.

We’re going to look back on all of this one day and share it with those who couldn’t be here. History in the making.

Bayer-Monsanto is hard at work branding the new company post-merger in an effort to leave the horrendous negative stigma of the monster Monsanto behind. In an ad on a screenshot someone used in their video, they used a Golden Retriever with a stick in his mouth to tell us they’ve got a website showing what a marvelous contribution they make with a healthy, happy lifestyle for every American.

They said 54% of households have a family pet, and 70% of them get more exercize. So… what does this have to do with Bayer-Monsanto, you ask? I couldn’t imagine, so I went to the website.

canwelivebetter.com    Seriously?   We could live better without Bayer and Monsanto in our lives, but just for fun, let’s see the con job.

Saving the earth: How to sustainably boost soil health

Good grief. They used the “S” word. That was all I needed to see: a tractor in a big field of contaminated earth being prepared for GMO, Roundup-infected seed. Unable to stomach any more of their bullroar, I left.

A quick search showed me Bayer has the corner on the market for pet care products and meds. Not in my house.

But this IS testament to the great job we have done to expose Monsanto in North America. Eventually folks will learn how many countries have outright banned Monsanto and their GMO seed and deadly Roundup. A lot of deprogramming will have to be done on this planet.

Read more about the “Bayer-Monsanto match made in hell” on the Corbett Report and see the video.

Catherine Austin Fitts is a “government insider” investigated by the AIM4Truth conclave and their research failed to verify she is who she claims. The data speaks for itself. See below. Just another illusion perpetrated by bad actors?

We’ve been told that MOST of the so-called whistleblowers, commentators, insiders, etc. on the Internet are disinfo agents. It’s becoming increasingly obvious because the shills are coming out of the woodwork. This one is trying to convince us there’s going to be a catastrophic market/economic crash. That’s not at all what I hear from people I trust. We’ve got this.

The charts in the article don’t fit well on this page and are on the small side, but you may find them at the source article at the link below. It won’t always be on the AIM4Truth blog, though as articles are only temporary to make room for new information.

Who is Catherine Austin Fitts?

Then there is the $21Trillion, now the $50Trillion, alarmist: 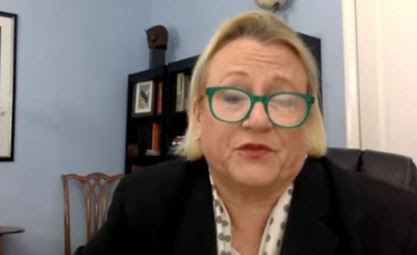 Catherine Austin Fitts is a frequent guest on alternative media sites like Greg Hunter’s USA Watchdog or the Dark Journalist. If you don’t know her, she is the woman who reports the trillions of dollars missing at the Pentagon. Her claims started out as $21 trillion missing and now she claims it is $50 trillion.

What do we know about Fitts other than what she and Hunter tell us? We did our own digging into her background and found that it didn’t pass the “truth test”.

Fitts’ HUD title (the way she reports it in her online profile) first appeared in the 1992 Plum Book for the Daddy Bush presidency.

Fitts needs to explain why she is not listed in the 1992 Plum Book, and when exactly (dates) she was hired and fired from her HUD position. She also needs to disclose whether she now draws an SES pension or if she is being paid by SES or Serco in other capacities.

However, while that position is listed as an SES job, Catherine Fitts is not listed in that position on p. 84, a Arthur J. Hill is:

Arthur J. Hill’s Bloomberg bio says that he formed his investment company in 1993, just after Bush resigned and Clinton was installed. Which likely means he served as Commissioner until Bush left office.

Now the mystery, where is Catherine Austin Fitts’ disclosure in the position that Arthur J. Hill held?

Where in the world was Catherine Austin Fitts in the Plum Book? The position she claims to have held is definitely a top SES position.

Did Catherine Austin Fitts hold the position as Assistant Secretary of Housing and Federal Housing Commissioner? Or is she a fake, phony fraud?

If she held this position, why doesn’t her name show up in the Plum Books?

Do the YouTube channels that host her as a guest know that her background doesn’t check out with the Conclave researchers, or are they part of the propaganda network on YouTube?

Surely, if Greg Hunter knew this he would inform his audience that we are unable to verify Catherine’s HUD position claims. Unless he, too,…….(sigh)

We welcome official verification that Fitts is who she claims to be and we will be happy to correct the story and let our readers know.

(June 19, 2018)  Note to readers and follow up: We have received emails from folks with their opinions and anecdotal info about Catherine. We will not post these as they do not offer the information we are looking for. Let’s be specific:

Is she who she claims to be? Not looking for opinions here. Just the hard core evidence and we don’t see any. And if she is a former SES operative, then we would like to bring to your attention many other questions we have about her narrative.

FULL DISCLOSURE: We fondly remember the interview we did with Fitts’ associate Harry Blazer in this blockbuster interview, available as a transcript.

Anatomy of the Deep State

What was hidden, shall be revealed. And so it is. No more illusions.

Check out this remarkable “Bing Aerial” footage from the Florida Maquis channel. He found the most interesting things!

DID MISSILE TAKE DOWN UNKNOWN CRAFT IN EASTERN VENEZUELA?

There are no illusions about weather manipulation, and they’re going big these days. The flooding across the planet is unheard of on this scale. Here in AZ we had a beautiful gift of a little rain for the first time in three months, but it’s hot, hot hot again now, and no chemtrails for a while. I feel guilty.

1Pacific Redwood shows us how they are manipulating systems to create widespread devastation and suffering. Those right-angles are a dead giveway, among other things if you know what to look for.

If you watched the video above in Venezuela you saw the fake clouds they’re using to cover areas they don’t want folks looking at. We can see through the illusions and are exposing the truth faster and faster.  ~ BP