As the energies spiral upwards and lift many of us up with them, the ones left behind in the thick, 3rd density are expanding their evil as they sink to new lows.

In Hawai’i, as if they haven’t had enough ecological challenges and turmoil this year, particularly on the Big Island, it appears men have been seen sneaking into a public garden where freshwater streams flow and poisoning the wildlife, which is a food source for locals.

There aren’t any slow news days any more, but for the lamestream, perhaps there are.

I don’t listen to Mark Dice but a friend sent this video. It will remind you, if you’ve forgotten, why you don’t watch mainstream news.

I inadvertently saw part of a video clip on a website wherein Megyn Kelly on NBC was discussing the impropriety of dressing up for Hallowe’en as someone of a different race. She felt it was overstepping the bounds of freedom to limit people in such a way, and it turned into a matter where she may lose her job. Unbelievable. So now the media is going to tell us how to dress for a favourite fun, costume event for entertainment and make it about racism?

If we’re all going to co-exist civilly perhaps we should be banning the terms “white rice” and “black rice”.

How about reptilians dressing up and parading around the planet as Humans? The establishment must go along with that because they’re doing it. Outright hypocrisy.

The control freaks are trying to tell us what to say, what to think, what to write, Tweet, share, and now how to dress? Everything should be illegal, right? Let’s just make it illegal to breathe and be done with every one of us since we’re low-life, inconsiderate, insensitive boors.

But it’s A-OK for a man to dress as a woman, and vice-versa. Earthlings are the laughing stock of the multiverse.

Here is some of the fallout from the “fake bombs” that we’re told wouldn’t even be able to detonate that the dimms sent to key cabal figures to make it look like Trump supporters were using terrorism on them. We know full well they accuse others of doing what they themselves do.

So now they have OUR protection units guarding THEM. Now that’s rich. Looks like a great opportunity to make some arrests, if you ask me.

Election fraud is something we’re watching for closely and it appears some suspicious activity has come to the attention of authorities with respect to Florida’s Andrew Gillum. Surprise, surprise.

Project Veritas hits another home run with this hidden camera video revealing the true intent of elected officials. I think it’s apparent to anyone paying the slightest attention to election platforms of the Democrat party that they cannot speak of their true intent IF they were to be elected because no one with two brain cells to rub together would vote for them if they knew their agenda. They will say and do anything to get in power. It’s too late, however. They have exposed themselves.

I find it amazing that they stoop so low as to create television spots saying an opponent would, for example, vote against health care for pre-existing conditions. This is what the Kyrsten Sinema ads on Phoenix television tell viewers about Republican Martha McSally and it is not true. The democrats are so dirty they can’t even pretend to run a clean election.

Whether outright lying or lying by omission—who would vote for a candidate who believes it’s okay to tell the People what they think they want to hear in order to get their vote? If they will lie and cheat about getting elected, what else might they do if in a position of power?

Sen Heitkamp Dir. Details Bait & Switch “… when she gets elected she’s going to be super liberal.

Dr. Caius Rommens developed GMO potatoes but subsequently renounced his work. He explains why we should be wary of the products he created.

We continue to learn about the negative effects of Genetically Modified food; this time—potatoes—and we get it straight from the horse’s mouth.

This guy is looney toones. He represents Stormy Daniels, and then Julie Swetnick—so he obviously has a reputation as “that kind” of a lawyer—and he believes he’s presidential material? What was he thinking? And now he’s under investigation for his nefarious law suit. 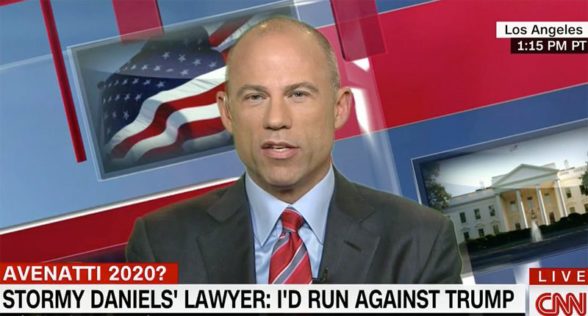 Avenatti Referred To DOJ For Investigation

According to The Daily Caller:

Senate Judiciary Committee Chairman Chuck Grassley has referred attorney Michael Avenatti and his client, Julie Swetnick, to the Justice Department and FBI for investigation into their claims about Supreme Court Justice Brett Kavanaugh.

“I am writing to refer Mr. Michael Avenatti and Ms. Julie Swetnick for investigation,” Grassley, an Iowa Republican, wrote in a letter to Attorney General Jeff Sessions and FBI Director Christopher Wray.

Grassley alleges that Avenatti and Swetnick engaged in a “potential conspiracy to provide materially false statements to Congress and obstruct a congressional committee investigation.”

Avenatti, a potential Democratic presidential candidate in 2020, came forward as the attorney for Swetnick just days before Kavanaugh testified before the Senate Judiciary panel about allegations from Christine Blasey Ford, a California psychologist who claimed that Kavanaugh attempted to sexually assault her when they were in high school in 1982.

Avenatti and Swetnick claimed they had witnesses to corroborate her claims of continuous gang rapes by Kavanaugh, but none ever came forward.