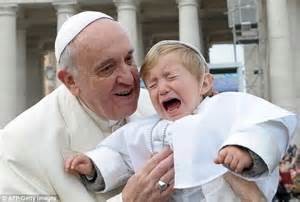 Very interesting news from Starship Earth. Very timely and…very revealing. (But we ALL knew the real truth about the Pope anyway…didn’t we?)

Thought I’d check in on the status of the intended arrest of the Poop in Geneva. It actually went better than I expected and the scheduled Ninth Circle satanic ritual was prevented.

The Poop actually showed up to throw his weight around in world financial affairs having nothing to do with religion or the Catholic Church. We hope the common law sheriffs on the scene are okay. Brave men.

I do wonder, however, why the plan to execute the warrant was publicized before hand. Why not do it covertly with no advance notice?  ~ BP

Common Law Sheriffs armed with a standing arrest warrant confronted and temporarily restrained Pope Francis on Thursday as he approached the Ecumenical Center where he was scheduled to address delegates to the World Council of Churches (WCC).

After a brief scuffle between the arresting Sheriffs and Vatican security, the Pope was released and rushed into a waiting vehicle. Two of the Sheriffs were heavily beaten and detained by the Vatican agents and then arrested by Geneva police along with two other people.

A complete on-the-ground description of the incident follows this Communique.

In the wake of the attempted arrest of Bergoglio, who was duly convicted for Crimes against Humanity in a Brussels common law court in the summer of 2014, the Vatican has released a cover story claiming that Bergoglio “suffered a fall” during the WCC conference and may be experiencing an undisclosed “health problem”. This fake story may be a preparatory move prior to Bergoglio’s removal as Pope.

According to a source in the Vatican and confirmed by others in Geneva, as a result of this confrontation, the clandestine ceremony of the Catholic Ninth Circle coven that was scheduled for that evening was canceled due to “security concerns”. The same Vatican source confirms that Pope Francis, Jorge Bergoglio, was to be present at the Ninth Circle cult ceremony along with top WCC officials and Swiss political leaders.

The Ninth Circle ceremonies normally involve the ritual rape and murder of at least one young child, according to eyewitnesses. (http://itccs.org/2013/10/28/i-saw-joseph-ratzinger-murder-a-little-girl-eyewitness-to-a-1987-ritual-sacrifice-confirms-account-of-toos-nijenhuis-of-holland/ ,  http://itccs.org/2014/09/10/transcript-of-anne-marie-van-blijenburghs-testimony-about-child-murders-in-belgium/)

Jorge Bergoglio’s unprecedented appearance in Geneva this week was prompted by Switzerland’s so-called “Sovereign Money Initiative” (SMI), a referendum to decide whether the country’s money supply would be controlled by a single national bank, restricting the power of private banks to extend credit and lend money. The Vatican Bank has considerable assets tied into the Swiss banking system and stood to lose if the SMI was approved.

Unconfirmed reports state that prior to his WCC appearance, Bergoglio met privately with Swiss political leaders and financiers to help block the SMI from passing or from being implemented. Some of these leaders were scheduled to be present at the Ninth Circle ceremony on June 21, according to the Vatican source.

Further updates about these events, the fate of the detained Common Law Sheriffs, and footage of the attempted arrest will be forthcoming, once every effort is made to secure the release of the imprisoned men.

Report of Combined Action Units (Teams A and B) on the events of 21 June, World Council of Churches (WCC) Ecumenical Center, Geneva

As arranged according to our original tactical plan, both Teams A and B deployed before the WCC event at which the subject BERGOGLIO(aka ‘pope francis’) was to speak. Team A acted in an open diversionary capacity and Team B was placed in concealment, so as to make the formal arrest of the subject.

BERGOGLIO’s location was positively identified by our inside source as being immediately adjacent to the WCC Pavilion some fifty yards from the site. Upon receipt of the source’s signal that the subject BERGOGLIO had begun to move towards the Pavilion, Team A members deployed at the front and rear entrances to the WCC pavilion along the designated approach route of subject BERGOGLIO. In that position they were quickly confronted by Vatican undercover operatives assisted by Geneva regular police. A scuffle broke out and two of the A Team were physically restrained by the Geneva police. The remaining team members then drew the security forces away from BERGOGLIO’s approach route to allow the concealed Team B members to make the arrest of the subject just outside the Pavilion.

As subject BERGOGLIO approached the WCC Pavilion with his retinue and personal bodyguards, two Team B members performed a secondary diversion, drawing away the bodyguards. The four remaining Team B members then moved on the subject. Contact was made and the ICLCJ arrest warrant was read aloud to subject BERGOGLIO, who appeared shocked and immobilized. Two Team B members then quickly placed the subject in restraint and attempted to escort him to the prearranged secure location. None of the remaining Vatican retinue intervened to protect BERGOGLIO, appearing confused and uncertain.

Within thirty seconds, however, additional Vatican security personnel who had not been anticipated or reported by the source appeared on the scene. These personnel immediately assaulted the two Team B members restraining BERGOGLIO. Another scuffle broke out. The other four Team B members then withdrew according to tactical protocol while the two assaulted operatives were held at gunpoint by the Vatican security personnel after receiving a severe beating. BERGOGLIO was released and immediately rushed towards a waiting vehicle.

In total two Team A members and two Team B members were placed under arrest by the Geneva police. These four operatives are still being held incommunicado and we assume are being interrogated. We have learned from our source that Vatican security and an official of the “Holy Alliance” are present at these interrogations, which raises a strong concern about a genuine risk to the team members’ lives. We therefore recommend immediate intervention to secure the Team members’ release, especially considering the injured condition of the two Team B members who were beaten by Vatican security personnel.

Despite the failure of the arrest of BERGOGLIO, we have learned from our source that the planned NINTH CIRCLE sacrificial ritual scheduled for midnight 21 June at Basilica Notre Dame on rue Argand has been canceled because of “security concerns”. BERGOGLIO’s planned participation at this ritual was also confirmed by the source. Our intervention can therefore be regarded as a success in terms of stopping the ritual. Follow up information to confirm the cancellation is forthcoming.