For information junkies, Telegram is a Rocky Mountain high. Flitting madly from channel to channel at the tone of the bell like Pavlov’s dogs can be exhausting—and exhilarating—at the same time and some portions leave us salivating for more.

Valuable facts, impressions, and perspective seep out of the sensational headlines which, if you’re a seasoned info warrior, flesh out the fascinating landscape on the flip side of the looking glass that is an Information War. Irregular warfare, indeed.

Telegram can be a dangerous place, a satisfying hangout, and an Earth Alliance backchannel. The newly awakened can get the nudges they need to accept the unacceptable and develop a framework for sifting through the weaponized words from the enemy, and ample giggles.

We sometimes find it to be a perfect stage for humour and satire with clever memes and cartoons, alongside cryptic hints of what may be simmering away on a back burner in the Resistance Movement.

That’s what flowed from the phalanges this morning. I wish everyone could spend some time on Telegram every day but not all could gain access for whatever reason. Like anything however, it can be a blessing or a curse and too much channel surfing can leave one in a confused state if they don’t have the required filters. It can also induce fear in the unwary.

For the few members of the crew who are unable to seek their info fix on Telegram every day, we will continue to bring you snippets of the interesting posts we find there, but they by no means represent all of it; it’s simply where my attention was guided. I try to find Twitter or Truth Social posts or articles to mix it up and provide variety and sources you can see for yourself.

Each of us would have a unique channel lineup; what I share is only a mirror of mine, tempered by a discriminating resume of years of sifting through the disinformation and a keen sense of intuition that has taken great effort to develop. It has holes, and that’s what makes it fun. I love surprises and am not attached to very much of what is developing on the cutting room floor for this particular movie. That comes from faith and trust and I’ve plenty of that.

We have a splendid new Q drop from yesterday encouraging us to see the truth of what is unfolding, to trust and have faith, to avoid divergent temptations to take us away from that truth, and to know that we are marching toward that ultimate goal of Ascension to the 5th Density, a realm free of evil, predators, and parasites. When we show the world the truth, and assist them to make sense of it and assuage their fears, we will all rise together. Where We Go One We Go All.

For those who missed it, here is a compilation of all the things that didn’t happen. No formatting was included. You get the big picture. Link to Telegram.

since POTUS took office
– They never thought she would lose. SHE LOST! –

– We won the House! – We Fires Nancy Pelosi – Canada will be under Trump as well as Australia, New Zealand and Pacific Islands
Wells Fargo just laid off 90% of their mortgage bankers.
Who needs mortgage bankers when NESARA is around the corner
Amazon Jeff Bozo to give pink slips to 10,000 before christmas

Things change fast, as evidenced by this update on the election in Georgia. Hopefully we will have results from 2020 and 2022 before the 2024 election.

Misunderstandings are commonplace in today’s volatile news gathering framework and Praying Medic felt it appropriate to share the following on his Telegram channel:

In case anyone is wondering about why President Trump’s speech about the special counsel got cut off (on Friday night). It was a private event and the few media outlets present were asked ahead of time to cut the feed when he finished talking about the SC. That was non negotiable. I was in touch with one of the producers who was there from Real Americas voice, and he explained it all to me. The reason all of the news feeds appeared to cut off at the same time is that they were all getting the feed from Real America’s voice. And basically, the announcers on the respective networks did a terrible job of explaining why they were cutting President Trump off. Trump’s announcement was a very last minute decision, and my friend told me the camera crew barely had time to get there and set up before the event started. So, there was no conspiracy, no foul play and no malice toward the President. Basically just good people doing their jobs and scrambling to get set up on short notice. Hope this clears up any confusion for people who were upset by what happened.

Clif High has a firm grip on reality and shares his insights in brief audio bytes from time to time. This one is excellent.

We keep getting updates on this guy Stéphane Bancel. He was hanged and it seems they want us to know the crimes have been addressed. Is this because ModeRNA was one of the worst offenders in the Vaxx genocide? They lied, and people died. The dark lords will say anything to coerce participants in their schemes to end the Human race and the money thrown at these henchmen is sinful.

Those Nuremberg-style trials can’t come soon enough, in my opinion but I hope they keep practicing on the cream they skim from the top in the interim. The gallows is appropriate, I suppose, but what’s wrong with the guillotines the psychopaths requisitioned to use on us? Too barbaric? We have some time to think about it. Public beheadings might be the best antidote to crimes against Humanity.

As expected, the perpetuator of Moderna’s clot shot protested his demise, saying that he, a French citizen, had been given immunity against prosecution by both French President Emmanuel Macron and U.S. Food & Drug Commissioner Director Robert M. Califf, both of whom purportedly told Bancel he would be “held harmless” in matters involving vaccine injuries or deaths.

It sounds like crazy talk but it’s the painful truth and the proof is out there for those who are brave enough to face it. Link to Telegram.

Steve Forsyth;
Their whole objective was to cull the global population to 500 million.
This was a genocide, democide attack orchestrated by the dark of the dark.

We are assured that justice is served in subtle ways if we have the discernment to connect the dots.

For the newly initiated into the Truther community, the key to discerning the above follows:

Nothing is what it seems and that is why Q told us it’s a “movie”. It’s a psychological military operation to wake the sleeping dead out of their apathy. Link to Telegram.

I think “Elon” didn’t really buy Twitter. Remember Trumps EO that basically states that ALL assets will be confiscated if you are guilty of high crimes against humanity. The military took control with Elon as the face.
Twitter will be gone after the STORM… my opinion

And how is that possible? Simple. “The Patriots are in control”, as Q stated.

You can’t make this up. I haven’t visited Truth Social all day until now and I happened to pick up this post 17 minutes after it went live.

The video will upload to this Rumble channel in case you get there before I do on Sunday.

Exciting progress forward.
Use worldwide_lens for judgment and understanding.

It has always been about humanity, as One Free People.

Our new society is evolving as we create replacements for the controlled, censored, and monetized communication platforms. We may want to check this one out when it goes live. Link to Telegram for more details.

Yakback, a new “non-corperate owned” online social media and social networking platform is being born as we speak.

YakBack has been making headway in terms of software updates to it’s Beta version (pre-release) with many security features being put in place so as to protect it’s users going forward.

Yakback will be a different kind of social, built on the premise of “Anti-Censorship” and with “Free Speech” in mind therefore i am expecting a lot of backlash and cyber attacks as a result of this approach.

YackBack should hopefully be officially released at the end of this month (Fingers crossed) in the meantime i will slowly move a few users over for testing and errors/bugs purposes.

Yakback looks forward to giving all of it’s users a chance to YACK BACK without preying eyes, bots or censorship systems busting chops !

The world is waking up to the deadly conspiracies designed to reduce the population dramatically. Ty and Charlene Bollinger have been instrumental in educating thousands to the frightening Truth about Cancer since their exceptional documentary by that name and then on many other topics. Their latest project will be equally as enlightening, says Mike Adams of Natural News.

– Ty and Charlene Bollinger have a NEW “uncensored” edition of Propaganda Exposed
– The truth continues to come out, confirming the warnings
– Many new interviews, new updates to existing episodes and a NEW episode
– People can register now to watch for free at TheTruthAboutCancer.us
– Optional digital downloads of the entire series available for sale
– Mike Adams pledges all affiliate revenues to FOOD DONATIONS in America
– Will partner with ministries to donate food supplies to food banks and hungry Americans
– Learn the truth about covid, #vaccines , the “plandemic” and much more

I want to leave you with a lump of humour in your gut. This is a far better and far safer test for Covid than the PCR—because we hear they want to bring the plague back again. So many variants, you know. I think we shared this before but history may repeat.

For today, that winds up another post. My Xmas letter is writ and I must process it so greeting cards get to Canada well before Christmas. The mail can be pitifully unreliable any more, especially at holiday time. Postal employees may be tied up with disposing of copious numbers of election ballots and put that ahead of the holiday mail.

Many thanks to the crew for the research and time spent sharing the fascinating snatches of information they find on the World Wide Web of iniquity. We can see the world is in turmoil, but more Light is seeping in and revealing the evil in the most shadowy corners as Light Beings morph into their original form and flood with world with wisdom and hope.

Individuals are tasked with forming their own worldview based on the truths they can assimilate, however, so it is a process.

Love and strength to all of you at this time when gratitude finds purchase in Humanity’s hearts and minds. Eli is sleeping under my chair and he sends his puppy love unconditionally.  ~ BP 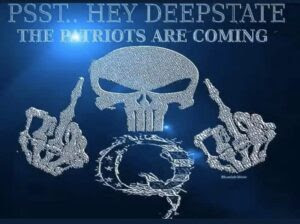