Roseramblesdotorg, an independent publisher, is now on Telegram at https://t.me/Roserambles1 and exists only on reader support as we publish Truth, Freedom and Love for public awareness. Please use GiveSendGo to make a donation. Thank You for your support. Fundraising Link.

Catching up on the magnitude of events and news unfolding is a daunting task but t’is the season for family and festivities and throw healing treatments into the mix and you have a wild schedule. I’m just over the moon to be able to say we’re hanging in there and enjoying every day as much as possible. Both next door neighbours have already been here bearing gifts and we are so very fortunate for the amplitude of blessings in our lives.

I hear that the images I insert on these pages take 24 hours to populate. I certainly hope the new Quantum Internet will improve on that pathetic performance issue.

Q has mentioned “sky event” and this just might qualify. No telling what it might be about, but I doubt it’s a “comet”.

“Christmas Comet” to light up the sky this holiday https://t.co/s44xrl6RMn pic.twitter.com/gvh2uKNKhl

If I skip a lot of the links I can update you on the interesting things I’ve come across in the time I’ve had to peruse the alt news.

Here in the Valley of the Sun I can report that there are no more references to jabs or the plague on the freeway Jumbotrons where I travel, and on December 20 at 3:33 pm, there was an EAS test on the Phoenix radio station we were listening to. The jocks made no mention of it; just went to the next commercial afterward.

Helicopters have been roaring overhead at all hours, shaking the windows, and two fighter jets got everyone’s attention this morning heading north, similar to this.

RT reported a Tik-Tok outage and the Nationwide Bank was down, too, with people screaming that they couldn’t access their pre-Christmas paycheques.

RT is being censored.

The move forcing a European satellite operator to take RT’s 24-hour German-language channel off air is a sign of unhealthy competition, RT CEO Alexey Nikolov has said, adding the company would defend its broadcasting rights in court.

“The reason it is happening is because nobody wants competition,” Nikolov said Wednesday. For the channel to get such staunch resistance in Germany is “like getting a medal,” he added.

Now, RT plans to defend its rights in court, with Nikolov stressing that the next step is to “fight legally.”

I hope this will make everyone happy. Trump says he got the jab. Link to Telegram.

Very interesting analysis from a subscriber:

He probably never took the vaccine but a placebo, he has to say he did. When it all hits the fan with big Pharma in the truth comes out he can’t be a hypocrite he has to be a martyr and a victim. Otherwise everyone that took the vaccine would say he knew it was bad and he didn’t take it but he told us all to take it. This is why I believe he always says it’s a choice in Freedom to take it. He can’t be tied to it being bad and take down big Pharma so he will be a victim in it also.

The most common phrase in the community might just be “tested positive”.

PM Trudeau says staff, security have tested positive for COVID-19, he has not

She is “fully vaccinated and boosted”.

These people will be injecting and testing themselves for the rest of their miserable lives.

NEW: Sen. Cory Booker revealed on Twitter that he has tested positive with a breakthrough case of COVID-19.

Booker said he received both vaccine doses and his booster shot and his symptoms are “relatively mild.” https://t.co/HJuubqZyYT pic.twitter.com/ES4QVdeQIm

Harvard professor Charles Lieber has been convicted of lying to authorities about his ties to China’s “Thousand Talents Plan” program – designed to attract the best foreign specialists.

Boston prosecutors said he knowingly hid a Chinese bank account into which he was paid a salary of $37k, living expenses of $158k and a $1.5MN grant to establish a research lab, all at the Wuhan University of Technology.

His income was not declared illegal, but failure to disclose them was. Lieber had also been awarded $15MN in grants from the US National Institute of Health and Defense Dept. (Harvard Crimson)

For what it’s worth, QUEen Romana posted the following. The “real vaccine” is not for us Humans. What a brilliant way to execute an extermination. It’s been difficult, and painful, but so effective and a very bold move with the normies compliant and none the wiser. Q & A Who is / are delivering the real #vaccine? Answer: 1)The US Special Forces, 2) Global Alliance Special Forces, 3) Intergalactic Alliance Federation of Worlds of Light Beings Special Forces, 4) Earth Defense Special Forces https://t.me/romanadidulo/5675 It continues… https://newspunch.com/another-senior-cnn-producer-arrested-for-raping-children-media-blackout/AGENT A1TORONTO POLICE CHIEF HAS “COVID” , NIAGARA FALLS CHIEF ON A BREAK. WHO IS THE NEXT CORRUPT BITCH COP??t.me/AGENT_A1/16138

Q the Storm Rider published this explanation on Telegram concerning the red pilling the military is going to get. Like most of the population, they are not immune or fully informed. https://t.me/c/1151938368/52098 Sandra Crosby, [12/18/2021 7:49 AM] [Forwarded from SANTINQ (SANTINO)] [ Video ] What are the odds? “Italy: after the mandatory vaccination for all security forces is approved, the military warehouse where the vaccines were stored magically catches fire.” ~ @JackSlaterPT (Twitter)

Nuremberg 2.0 is a reality.

Nuremberg 2 trial against world leaders for crimes against humanity finally kicks off in Poland.

We cordially invite you to a live broadcast of the first Republic of Poland Members of Parliament Investigation Committee as part of the Nuremberg 2.0 project with the special guest Dr. Reiner Fuellmich attendance. Many were demanding an update to our first story, well here it is!https://t.me/TheOfficialSantinohttps://www.eutimes.net/2021/12/nuremberg-2-trial-against-world-leaders-for-crimes-against-humanity-finally-kicks-off-in-poland/

Tedros just said that countries give boosters to kill children, which is not right. 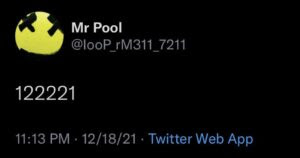 Mr. Pool pointed to December 22 for some reason. From my perspective it was a different kind of day. It began over coffee when a beautiful Cooper’s Hawk slammed our second story window and scared the living daylights out of us. Poor thing. Instant death. We sneaked in an impromptu PEMF/Rife session and a generous animal communicator/healer began treating Mica in a distance healing session. All I can say at this point is that this morning he was energized and on our walk insisted on going further than we’ve gone for months. I had to jog a little at times to keep up but he’s still not putting his foot down with any pressure. I keep running into people who give me remarkable alternative healers to contact. I feel like it’s going the way it’s meant to go, ever optimistic. What if it’s not cancer? This might be my last transmission before Santa comes but you can remain current by visiting various websites, Telegram, Twitter, etc. Trevor Winchell keeps cranking it out.

And with that, I will continue my baking as our tourtière and quiche must be ready for tomorrow evening. We wish you all a safe, happy, and exciting holiday season, sprinkled liberally with Christmas miracles.

Big love and hugs from all of us here to the warriors out there across the planet.  ~ BP

Christmas 2020 after the move