Editor’s Note: Roseramblesdotorg is now on Telegram at https://t.me/Roserambles1. Thanks!

The chaos is increasing and social media is dealing with a lot of smoke and a lot of fires. The best place to be is watching the operations from the sidelines and not getting involved. No attacks.

It looks like Kyle Rittenhouse isn’t going away any time soon. He was on Tucker Carlson attacking Lin Wood—one of the most godly men on the planet.

There’s always a reason good [wo]men are criticized and attacked. Since “negative opinions” often sway people who have little idea what we’re dealing with, I don’t allow it here. To speak ill of people who have sacrificed for this movement and continue to give and provide valuable service to Humanity is not ethical, in my opinion. I don’t feel good when I read negative comments about our patriots. I don’t think it’s kind, and I don’t like looking a gift horse in the mouth.

Who told Kyle (whom I like and support) to say that about Lin Wood? Then the pile on afterwards. Any Communist operatives in his inner circle or advising him? Sounds like a #DeepState ambush to me. Something very fishy going on.

As for the Waukesha Christmas Parade terrorist, as usual, the story is evolving. Below is the latest mugshot for perp Darrell Brooks, complete with the typical drug-induced OR Photoshopped vacant stare. See the resemblance to the Batman Theater and the Sandy Hook School shooters further down? Corrupt states generate more false flags. Interesting that Florida, after suffering through the Parkland School shooting and the Orlando Pulse Night Club massacres among others have much less going on under Ron DeSantis’ watch. Good thing they got Rick Scott out of there. 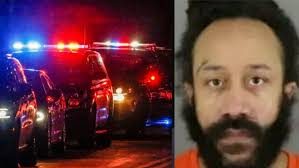 “official” mugshot for Darrell Brooks, alleged driver of SUV that drove through a parade in Waukesha, WI on November 21, 2021.

mug shot for Adam Lanza, alleged shooter at Sandy Hook, CT school on December 14, 2012. Some believe this is a composite image created in Photoshop of an imaginary boy.

Parkland, FL patsie Nicholas Cruz, above, looks similar, after the Marjory Stoneman Douglas High School event in 2016. There’s a pattern because the control freaks use the same old playbook again and again—because it worked! The sleeping public believe everything they see and hear from the legacy media.

The deep state also ruined the lives of two brothers they primed to be the fall guys in the Boston Marathon Bombing. One is dead, as well as his friend in whom he confided, and the younger brother was shot in the throat [so he couldn’t speak?] and thrown in jail. Remember these young men? Dzhokhar Tsarnaev and his older brother Tamerlan, below.

Some naïve people really believe “gun control” will solve the problem after the media does their job following the cabal’s orchestrated shootings. We know that the corrupt 3-letter terrorist organizations will always ensure their operatives have the weapons they need to murder and subjugate Humanity while the upstanding citizens, disarmed and vulnerable, would be easy prey. If you ask the Russians, the Brits, or the Australians, they’ll tell you “don’t ever give up your guns”.

The criminals are lawless so why would they comply with gun laws? This is common sense. Do people really think murderers, thieves, etc. go through the gun registry and get background checks??? We know Operation: Fast & Furious was about the Clinton Crime Syndicate including Eric Holder of the Dept. of Justice running guns and drugs over the southern US border to facilitate destroying America from within.

The general public are far too trusting of their government officials. I won’t call them “elected” because they weren’t. They were [s]elected… installed…appointed. If the media told the masses to inject themselves with poison would they do it? Oh wait—they already did. My memory is heavily taxed these days.

The drama designed to wake up and educate the “normies” is too much for me and I have enough of my own so I will focus on the positive stuff. We are going to relearn “medicine”. Think safe, inexpensive, effective, easy to procure. Dr. Immanuel understands very well the spiritual aspect of this war, as well.

Dr. Stella Immanuel: Everybody needs to have hydroxychloroquine at home – Brighteon.TV

What will it take for people to get it and refuse to comply?

What’s in these lockdowns for the cabal? They have wanted to eliminate us from “their playground” so they have free run without the peasants around. The Telegraph warns us away from their ski resorts in Austria. Link to Telegram.

There is a photo floating around that we are to understand is Gavin Newsom at “the spa”, as Queen Romana calls it. A cross is displayed on the wall over the bed and he is masked. Masked at GITMO? Are they forcing the criminals to live by the rules they passed for the rest of us? I can’t remember either place I saw it.

Personally, I believe the Q Team, White Hats, Earth Alliance have barely hinted at “what’s coming” and I believe the ending will knock our socks off. Jetson White shared a video of one young lady’s recent dream that may resonate. I have anticipated that level of climax to the “movie” for some time and yes, symbolism is important. You don’t need to watch the entire video to get the point but it is a great analogy. 20 min.

In the Great White Gulag, the natives are restless and NOT Turdeau fans.

In the medical reform arena, Tore shared what sounds like a fascinating discussion on Sunday which I haven’t yet indulged but I know some of the crew will want to take this in. Click the link below to access the website.

A spontaneous Sunday show. More startling talk from Dr. Venter. Some amazing discussion on teleportation, DNA sending and receiving, futuristic medicine and where this is all going. How does it relate to POTUS and Kodak? Is there a connection to the Controla-virus? The government has hidden information. What other plans do they have for us? Listen to this discussion and prepare to open your mind

I thought this an appropriate closing for leaving with a smile. “The Spa” is well-appointed, but that doesn’t mean they get their own room.

If you’re new, this is “Big Mike” Obama.

Appreciation to the crew for the ongoing education we are getting. Telegram is a wealth of information, too. I unsubscribed from any channel trying to sell me coins.

Think well, be well, stay well. Brighter, exciting—but at the same time calmer days are ahead, my friends. We have little idea of what is possible as a result of the fake education we have had. Miracles are coming.  ~ BP