The Movie gets spicy! SCOTUS to decide on Election fraud case ~ February 20, 2021

The election fraud is much like this Just for Fun post about the NFL finding an additional 23 points after the superbowl game:

Maxwell has the audacity to say she was “abused” by one of the guards…wait a minute…didn’t she get many children / young girls to become her buddies’ sex puppets? Luring young females into a modeling gig, or jump on a plane to a private island and then take their passports so the girls / children are trapped? She didn’t care about the life of a child and how her acts RUINED, DESTROYED or killed their souls! She only cared about her socialite status! I truly hope Justice throws the book at her! She deserves it!

Remember, it’s those 20 line items she wanted redacted from her deposition and the judge denied that! Makes me wonder…is Injustice John Roberts named as part of the 20 lines? What will injustice Roberts decide about Trump’s legal cases concerning Election Fraud? Does he go forward with the cases and he can have a quiet exit to GITMO? Or does he reject the cases and deal with the wrath of the Epstein files and goes down publicly like the low life scum that he is?

Dog Comms represents someone is getting GITMOED:

Many Dog Comms posted by our Secret Anon, DaKine. Posted on t.me/SantaSurfing. Then HRC posted this. This is kind of big because we know White Hats control her Twitter account.

Who else is going down?

This puppy knows a bumblehead (posted by @Robertendicott89 on TikTok):

Even Sammy knows…this awesome meme is posted by BadAss Bom:

We are watching a movie, this is a live demonstration of Holoportations (Holograms) – Posted by @XAnon: 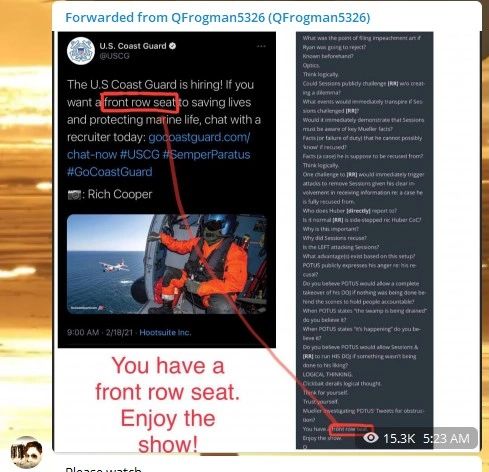 Charlie Freak and his wife did a podcast on February 16, they were joined by two other guests. Charlie and his wife stated that we are all a part of this movie:

I want to thank Charlie and his wife for their efforts to help save animals. They are on a mission. Also, want to thank them for supporting fellow podcasters out there. That is how we roll!

BadAss Bom posted this yesterday and thank you!!!

Fellow patriots and podcasters encouraging and helping one another! You all help each other in so many beautiful ways! Let’s keep praying and build our faith!