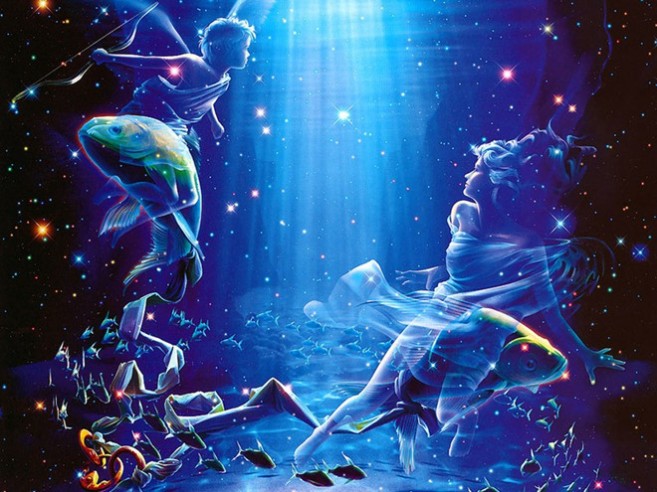 We are having a Full Moon in Pisces on August 26th 2018. This is the peak of this Lunar Cycle which was initiated by a Solar Eclipse in Leo on August 11th. The energies of a Full Moon may start to become noticeable in the days leading up to it and in the days following, however, it is strongest in the 12 hours before and after. It can also reflect how things play out over following two weeks.

This Full Moon is the first lunation since June 28th that is not an eclipse, however, the energies of the previous eclipses are still in the backdrop of what it is happening at this time and in the coming months as well. Mercury also ended its retrograde one week prior to this, with Mars ending its retrograde the day after this Full Moon, and Saturn getting close to ending one as well.

Considering all of this, now and in the coming weeks is a period in which things can begin move forward after a process of re-orientation and potential changes. For everybody, it can be in different areas of your life depending on how these energies correspond with your natal birth chart. You can read more about the general themes of these eclipses and retrogrades here.

Full Moon In Pisces Opposite Sun In Virgo

At every Full Moon we experience a push-pull or integration between the energies of two opposing signs, in this case it is the Sun in Virgo opposing the Moon in Pisces. We recently began Virgo season on August 23rd, the sign of physical health, duties, efficiency, purity, perfectionism, and service. It is a sign that is detailed, discerning, practical, realistic, productive, but can also be critical, nit-picky, and cynical.

The opposing sign of Pisces where the Full Moon is located is quite different. Pisces is more of a flowy and easygoing energy associated with compassion, creativity, spirituality, and oneness. It is dreamy, imaginative, idealistic, sensitive, and empathic. Pisces can also be elusive, flaky, deceptive, intoxicating, escapist, and delusional.

Virgo, as a Mercury ruled Earth sign, it has strong orientation around the physical and mundane world. Pisces being a Jupiter and Neptune ruled water sign, it is more invested in the spiritual and emotional aspects of life. Both signs are adaptable and are also associated with health in their own ways.

This Full Moon is aligned with Fomalhaut, a prominent star which was traditionally one of the four royal stars. Fomalhaut shares many of the same traits as Pisces and somewhat amplifies them. It highlights the magical, artistic, and otherworldly qualities of Pisces. It also can amplify escapism tendencies and lack of being grounded in the real world.

This Full Moon is connected to a Grand Trine in Earth signs, forming what is called a ‘kite pattern’. Even though this Full Moon has many of the Piscean-Fomalhaut energies mentioned, there is still a lot of energy to keep things grounded, practical and realistic, especially considering that the Sun is in Virgo challenging the Moon, both in aspect with Saturn in Capricorn. This is a great energy for making things happen in the real world which also channels the creative, spiritual, imaginative, compassionate, and magical qualities of Pisces/Fomalhaut.

There can be some new developments or potential excitement connected to our careers, duties, and matters connected to the physical/material world. This can be great for original and innovative approaches to these areas, or even regarding our routines, tasks, and structures. In some cases, this could have something to with health and lifestyle.

Some people can be building something in a new way which can have lasting results. This can also be good for integrating more technological, scientific, metaphysical, or even astrological approaches towards these things.⠀

The rulers of both Pisces and Virgo, Jupiter and Mercury, are in a square aspect during this Full Moon. It will be strongest from August 27th-28th. This interplay between these two planets began in the second week of July and was also part of Mercury’s retrograde and peaked at the last Solar Eclipse. Due to these planets being the rulers of this Full Moon, it can add more tension to the opposition of Virgo-Pisces.

Around this time we can be more easily scattered. Their can be a clash between facts and ideals, as well as with details and broadmindedness. However, this can also be a great energy for learning and expanding the mind.

This is the post-retrograde and final square which may bring about some sort of a conclusion process to how this energy has been playing out throughout this summer. This may have to do with an adjustment or developments connected to your beliefs, ideals, faith, and understandings. Perhaps it can be about having realizations of our blind spots or deeper truths.

With Mercury in Leo, there can be some sort of expansive energy around our self-expression or in the way we think. Maybe this can be connected to plans or developments around education, travel, marketing, teaching, and publishing. With Jupiter being in Scorpio, it could also have themes around with financial matters, deeper understandings, transformation, or sexuality.

Venus in Libra is in a square with Pluto in Capricorn which is strongest the day of the Full Moon and the days surrounding it. This can playout as power struggles, possessiveness, intensity, manipulation, or changes amongst friendships, in social situations, or amongst lovers. Fears around these areas can come up or hidden matters may surface.

For some people, this could manifest as challenges around financial matters, however, it can even play out as financial gain. Even with any of the potential challenges mentioned above, this can be a passionate energy romantically or even socially. It can also be good for some sort of aesthetic transformation.

Venus is also in a sextile with Mercury in Leo which will peak from September 2nd-4th after the Pluto energy (mentioned above) fades. Although this isn’t a strong aspect, it still favours social interactions and communications which can be more graceful, diplomatic, and loving. This is great for developing or working on creative idea and it even manifest as financial benefits for some.

Mars About To End Retrograde Followed By Saturn

At the time of this Full Moon, Mars is in its final day of being retrograde which began on June 26th and peaked in late July and early August around the time of the Total Lunar Eclipse in Aquarius. This has been a time of re-orientation and even a release of how we apply Mars in our lives. It is associated with assertion, drive, aggression, physical action, sexuality, motivations, and desires.

In has been mostly in Aquarius while aligned with the South Node and square Uranus. Its themes may have been oriented around the collective, groups, colleagues, friends, social media, as well as humanitarian and social issues. It may even be connected to how we assert ourselves with our intellect or how we apply our innovative selves.

Mars finishes its retrograde at the end of Capricorn which can bring themes connected to our goals, ambitions, careers, responsibilities, and perhaps apply ourselves with better structure, resourcefulness, and in a more solid way. Also, Saturn (the ruler of Capricorn) is getting close to ending its retrograde there on September 6th. All of this combined is an indicator of moving forward in new ways in regards to the Capricorn themes mentioned.

Things To Consider During This Period

What developments have come up for you over the last few months and what are the solutions in how you need to proceed? How can you achieve real and tangible results using your creative expression or spiritual awareness? How can you integrate innovative, technological, or unconventional approaches towards career, duties, health, or lifestyle? Is there anything coming up that is asking you to balance the spiritual with the physical? What do you need to be learning at this time? How can you make your dreams a reality?

These are just some examples of what may be coming up for you, however, there may be other variations of this energy playing out as well.  If you wish to do any sort of intentional release connected to what has come up at this Full Moon, it is best to do so anytime over the two weeks following, when it is waning. The exact moment of this Full Moon is on August 26th at 11:56 am Universal Time. You can click here to see what that is in your time zone.

Cynthia is the typical Pisces! Her left brain activities include scientific activities in the hospital laboratory as a director. Her right-brain activites show as a painter, photographer and musician. She is known as the scientist who sings!
View all posts by cindyloucbp →
This entry was posted in Uncategorized and tagged Carmen Di Luccio, changes, collective evolution, love, re-orientation. Bookmark the permalink.